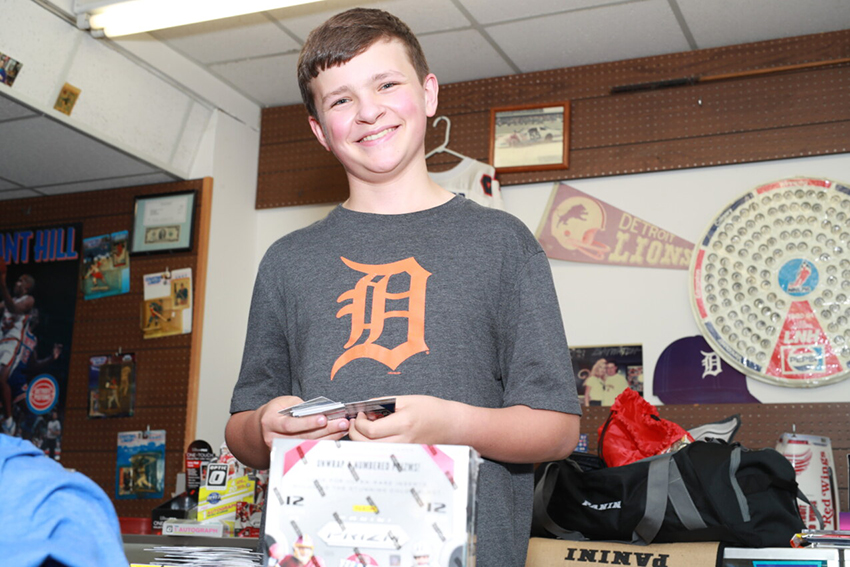 Wesley Kowalczyk, a 12-year-old collector from Mason, Mich., has been selected as the Grand Prize winner of the 2019 Panini NFL Player of the Day National Sweepstakes. Kowalczyk learned the news at a special event last Thursday with his parents at a small ceremony at his favorite hobby shop, Extra Innings. Along with surprising him with the news, Panini Awarded the youngster with a swag bag of Panini America-branded apparel and trading cards.

For the past 20 years, the Panini NFL Player of the Day hobby shop promotion has awarded collectors with more than two million prizes. And each year, the promotion concludes with one lucky collector spending the day with an NFL player. This typically includes a private party for friends and family and then a free autograph session for the community at the local card shop. But due to COVID-19 and social distancing guidelines, Kowalczyk will have a different experience.

In lieu of a private party, Kowalczyk and his friends and family will participate in a special Zoom call with Detroit Lions rookie running back D’Andre Swift on Thursday, July 9. During the call, they will conduct a Q&A with the newest Lions star who will also sign autographs for all of the participants as well as for Rick Mettert, the owner of Extra Innings, to award to some of his other top customers. After the Q&A and autograph session, Kowalczyk will conduct several box breaks. Additionally, the next time Kowalczyk visits Extra Innings, he will get a $250 shopping spree for Panini America products.

“We are excited to create this special experience for Wesley and his friends and family,” said Jason Howarth, Panini America Vice President of Marketing. “Obviously, due to COVID-19 and social-distancing guidelines, it became impossible for us to stage an event like we’ve done for the past 19 years. But we know that, as a passionate collector, Wesley will be blown away by the rare and unique Panini collectibles, the chance to talk to and get to know D’Andre and the D’Andre memorabilia he’ll be awarded.”

One of his favorite outings is to explore card shops and antique stores looking for cards and sports memorabilia. In addition to being a regular at Extra Innings, he has shopped at hobby stores throughout Michigan, Ohio and Pennsylvania. He takes great pride in his collection, and friends and family have started calling his bedroom “The Museum.” His favorite cards are a 2017 Contenders Draft Picks Football Tom Brady autograph, a 2020 Contenders Draft Picks Football Emmitt Smith Printing Plate 1/1 and a 2005 Joe Montana auto.