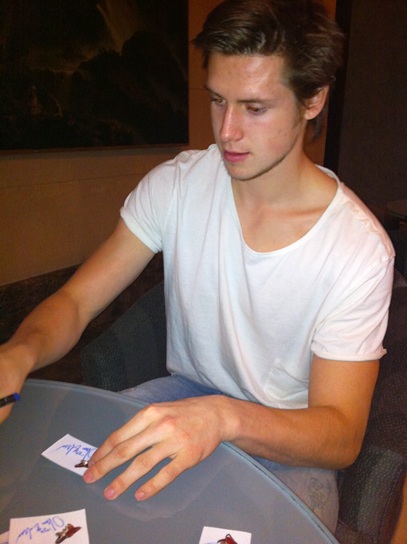 The Swedish-born Oliver Ekman-Larsson has a name like a law firm but he's way more offensive. The point-minded defenseman, the sixth overall pick of the Phoenix Coyotes in the 2009 NHL Entry Draft, has scored 16 points in 21 career international games.

The Swedish-born Oliver Ekman-Larsson has a name like a law firm but he’s way more offensive. The point-minded defenseman, the sixth overall pick of the Phoenix Coyotes in the 2009 NHL Entry Draft, has scored 16 points in 21 career international games.

He helped Sweden to bronze-medal finishes in both the 2010 World Junior Championships and World Championships, tallying eight points in 15 combined games.

Late last week, Panini America’s Alex Carbajal sat down with Ekman-Larsson for his first autographed signing with an NHL-licensed manufacturer. While he was there, Carbajal lobbed some life-or-death collecting questions the lanky Swede’s way.

The Knight’s Lance: Were you much of a card collector growing up?
Ekman-Larsson: Yeah, I have a few cards of Swedish guys playing in the NHL, like [Nicklas] Lidstrom, [Peter] Forsberg and [Mats] Sundin.

TKL: Are there any cards in particular that you looked for as a kid?
Ekman-Larsson: I wanted to have as many as possible. I still have my cards of Lidstrom and Forsberg.

TKL: For collectors out there who might be on the fence about who to collect this season, why should they collect you?
Ekman-Larsson: That’s a good question, too. I want to be the next Nik Lidstrom and try to be a good hockey player and be a superstar in the NHL.

TKL: Since you just got called up to the NHL, what’s the one thing that you want to do the most?
Ekman-Larsson: I just want to have fun every day. I love to play hockey. It’s fun to play hockey every day and have nice weather. Back in Phoenix it [the weather] couldn’t be better.