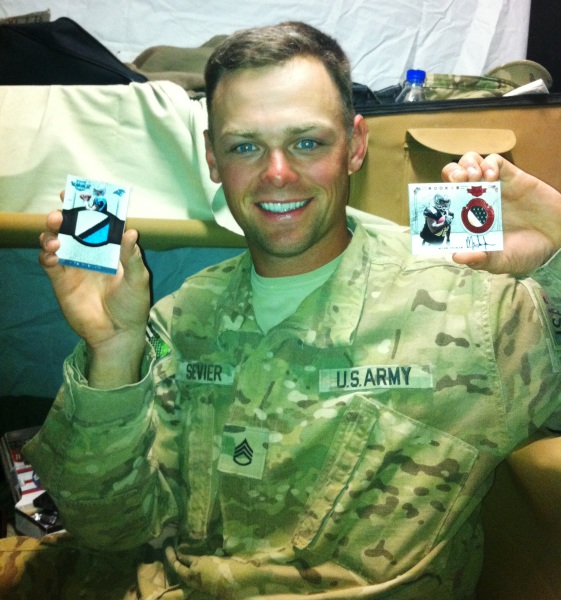 My first correspondence with U.S. Army Staff Sergeant James D. Sevier III came in late January via email. He contacted me to inquire about a redemption he'd been waiting on for quite some time. Over the course of the next several emails, I discovered that in addition to being a diehard Panini America collector, James is also on his second tour of duty in Afghanistan.

My first correspondence with U.S. Army Staff Sergeant James D. Sevier III came in late January via email. He contacted me to inquire about a redemption he’d been waiting on for quite some time. Over the course of the next several emails, I discovered that in addition to being a passionate Panini America collector, James is also on his second tour of duty in Afghanistan.
In addition to feeling incredibly honored and more than a little unworthy, I vowed to take care of his outstanding redemption issue and to also send him a little care package from all of us here at Panini America in hopes of making his stay overseas just a little more enjoyable.

It took more than a month for the package to arrive, but judging by James’ return email, the wait was well worth it.
On this Memorial Day holiday, an entire country pays tribute to the brave, heroic men and women who have lost their lives defending this country. From all of us here at Panini America to all those still serving in the United States Armed Forces, my opening line to James in my first email to him bears repeating: “Thank you for your unselfish service to this country that makes everything we do here possible. We wish you a safe tour over there. Get back here in one piece and thanks again.”
Now, here’s a little more about Staff Sergeant James D. Sevier III, in his own words:
“I reside in Monroe, La. I’ve been married for 8 years now. My wife, Susan, bless her heart, puts up with my collecting addiction. She calls it our ‘retirement fund.’ Little does she know, if I can avoid it at all, my collection will never leave my hands. We have one child, my daughter Madyson, who is 4. I have even gotten her a little interested in cards! She loves picking up a pack or two of Dora the Explorer cards at Walmart!
“I’ve been a member of the Louisiana National Guard for 12 years now. Like most people, I enlisted in order to pay for college. I currently hold the rank of Staff Sergeant (SSG). I serve with an engineering unit that consists of both vertical construction (carpentry), and horizontal construction (dirt work). Being in the guard has brought me to Afghanistan twice now. I was here from 2004-2005 and now from 2011-2012. Consequently, my first deployment is where I found my passion for collecting again. Until then, I hadn’t really collected since I was a kid in the early 1990s.
“We were lucky enough to score an internet satellite  shortly after we got here, so I would spend most evenings trolling the Internet trying to find something that interested me. One night on eBay I ran across a Ryne Sandberg autograph card. That sparked my interest as to where the hobby was at that time, and curiosity as to how much it had changed since I last collected. Man, what I found was a whole new world of card collecting. Seeing jerseys, bats and autographs actually on and in the card was amazing to me. Since then, I have been hooked all over again.
“I am now stationed at Fob Arian, Afghanistan. This is a tiny post in the Ghazni province, which is located in the mid-eastern section of the country. When we first arrived in late November, it was under Polish military control. The food was terrible and there was no running water, but we made do. You may be able to find a news article or two about this place. See, when we first arrived, the Polish spelled this place Aryan. Anyone that knows a bit of World War II history knows the history of Hitler and his ‘Aryan Nation.’ I found it odd that the Polish were OK with being in control of a place that had the same spelling. Anyhow, someone in the press blew it way out of proportion and stated that the U.S. was actually in control of a base named ‘Aryan.’ Long story short, it’s now spelled ‘Arian.’
“Hopefully I will get back home around the end of the summer. Man, it can’t come fast enough! Again, once I’m home, I am making it a point to come to Panini America HQ to show my appreciation. I have always wanted to see Panini HQ anyhow, and now I have a good reason. Thanks again. That package made my time over here just that much better.”
Once again, to James and everyone serving in the military: A sincere, heartfelt ‘Thank You!’ from all of us here at Panini America.