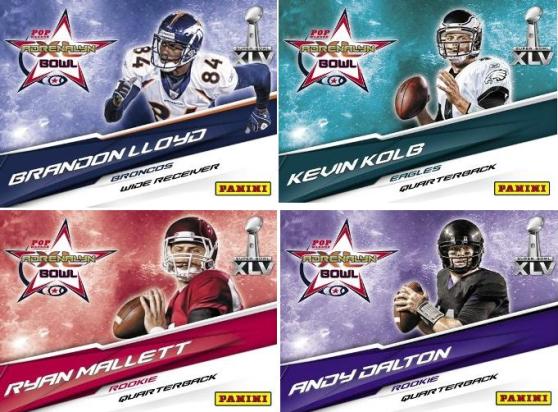 Congrats on the monster #NFT!

“Texas is known for their football and these games between local Pop Warner teams are a great way to kickoff the Super Bowl,” said Jon Butler, Executive Director of Pop Warner Little Scholars. “We are fortunate to have a great partner in Panini America who adds to the overall game experience for our young athletes and a strong North Texas Pop Warner program that helped organize this event.”

The 2011 Pop Warner Adrenalyn Bowl will be a match-up between the Arlington Thunder and the Mid-Cities Giants, both teams from the Pee Wee division (ages 9-11).  The game will be preceded by a Tiny-Mite (ages 5-7) exhibition between the Oak Cliff Titans and the Oak Cliff Redskins.  Both games will be played with Spalding’s Official Pop Warner Football.

“With the Super Bowl in Panini America’s backyard, we are especially excited for this year’s Adrenalyn Bowl, as we continue our commitment to providing a memorable experience for Pop Warner’s youth,” said Mark Warsop, Chief Executive Officer of Panini America. “As an NFL licensee, we were able to provide a once-in-a-lifetime opportunity for these kids with NFL players Brandon Lloyd and Kevin Kolb and two top NFL draft prospects in Ryan Mallett and Andy Dalton.”