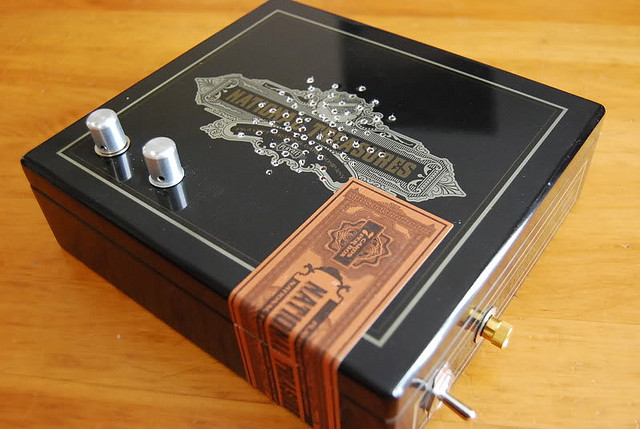 I was poring over comments left on The Knight's Lance late last week when I stumbled across one in particular that required a closer read and, eventually, a closer listen.

I was poring over comments left on The Knight’s Lance late last week when I stumbled across one in particular that required a closer read and, eventually, a closer listen.

Compelled by images showcasing the guitar amplifier he crafted from a 2007 National Treasures box, I contacted Cogburn, currently juggling a full-time job and graduate school, for more information. Luckily for us, he was happy to share.

“I opened a case of 2007 NT a few years back for a group break on a card forum and thought the boxes were too nice to just toss out, so I held on to them figuring I would find a use for them in the future. Last year, around Christmas time, I was looking for something I could build for a DIY white elephant gift exchange some friends hold at their holiday party. A lot of my friends happen to be musicians and I had come across cigar box amps in the past.  The National treasures box was the perfect fit.

“I’m certainly not an electrical engineer, and I still have a hard time reading schematics, but after scouring the internet and picking the brain of an engineer friend, I was able to gather the necessary info and order the parts. The speaker was salvaged from an old broken radio. I practiced my soldering skill for a bit and played around with the layout of the components, but all in all it took a weekend for me to end up with the finished product.  The amp was a hit among my friends and I ended up building two more in the following month.

“The circuit is based on the runoff groove ‘little gem’ amplifier. For a 9v-powered amp it produces a good amount of noise, from clean to distorted. Enough sound that a friend was able to play along with a drum kit without being drowned out. The speaker output is mono, but the amp still functions well as an iPod speaker. Overall, it was a fun build and I have some improvements I would like to include in the next version. I was glad I was able to find a use for these boxes and merge these two hobbies.”

Trust us, Amarin, we were, too. Truly innovative stuff. Thanks for sharing with us.

By the way, here’s what the amp sounds like:

And here’s a better view of what the amp looks like:

6 Replies to “Amplified! Making Beautiful Music from an Empty Box of 2007 National Treasures”