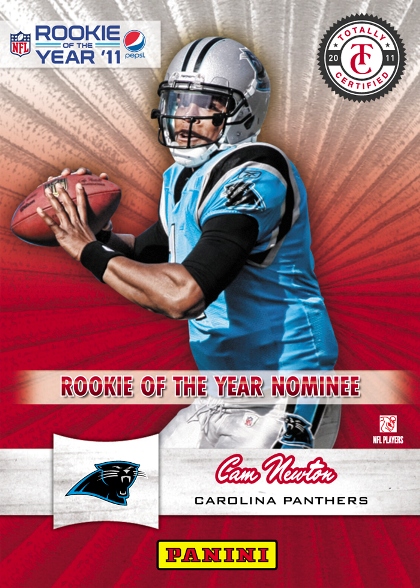 The payoff for collectors and NFL fans everywhere has been some pretty sweet virtual cards highlighted on NFL.com each week in a special Pepsi Rookie of the Week gallery, across social media platforms and the NFL.com rookies voting page. But now the stakes have been raised. The 17 weekly winners have been whittled down to the five most impressive rookie performers who will now vie for 2011 Pepsi NFL Rookie of the Year honors.

Vote now for your favorite choice at NFL.com, then share the image of the Pepsi Rookie of the Year nominee you voted for on your Facebook page. In addition, post the image on the Panini America Facebook page (after you “like” us if you haven’t already) or simply comment with the nominee you voted for. On Twitter, use the hashtag#PepsiROW and mention @PaniniAmerica to Tweet out the card image of the rookie you voted for. For doing those things, you’ll be eligible to win special prizes. Oh, and there just might be a special payoff at the end of the season.

The winner will be presented the 2011 Pepsi NFL Rookie of the Year award in Indianapolis, the site of Super Bowl XLVI, at NFL Honors, a two-hour primetime awards special to air nationally on February 4 from 9-11 p.m. EST on NBC.

Von Miller, Denver Broncos
Miller, a Texas A&M product, started all 15 games he played and tied Denver’s single-season rookie sack record with a team-high 11.5 sacks, placing him second among all rookies in 2011 and tied for third overall in the AFC. He was one of six NFL players to record a half sack in at least 10 games. He totaled 64 tackles (50 solo) and led the team with 19 tackles for a loss in addition to ranking second on the club with two forced fumbles. He was selected as a starting outside linebacker for the AFC squad for the 2012 Pro Bowl. The second overall pick in the 2011 NFL Draft, Miller was nominated for Pepsi NFL Rookie of the Week three times.

Cam Newton, Carolina Panthers
Newton set the record for most passing yards by a rookie in a season (4,051), surpassing Peyton Manning’s previous record of 3,739 in 1998. He set the single-season quarterback rushing touchdown record with 14. He is the first rookie to throw and rush for 10 touchdowns in the same season, and only the second player to pass for more than 20 touchdowns and rush for more than 10 touchdowns in a season. He is the first player in NFL history with more than 4,000 passing yards, 500 rushing yards and 10 rushing touchdowns in the same year. Newton, who started all 16 games, finished his first season with a 60.0 completion percentage and 21 touchdowns. He amassed an additional 706 yards and 14 touchdowns on the ground. The Auburn product was the first overall pick in the 2011 NFL Draft and was nominated for Pepsi NFL Rookie of the Week 11 times, winning three times.

Patrick Peterson, Arizona Cardinals
Peterson started all 16 games for the Cardinals in 2011. He finished first in the NFL in punt return yards and second in punt return average. His four punt return touchdowns are tied for the most in a single season in NFL history. As a cornerback, Peterson recorded 64 tackles, including 59 solo stops. He tallied 13 passes defensed, two interceptions and one sack. Peterson was named to the NFC’s Pro Bowl squad as the team’s kick returner. Peterson, who played collegiately at Louisiana State University, was nominated three times for Pepsi NFL Rookie of the Week.

Aldon Smith, San Francisco 49ers
Smith, the seventh overall pick in the 2011 NFL Draft out of Missouri, played in all 16 games for the 49ers. Smith tallied 14 sacks on the season, placing him in a tie for fifth among all NFL defenders. He finished the season just a half sack short of the single season rookie record. On the year, he also added 37 stops, including 31 solo tackles, four passes defensed, two fumbles forced, one fumble recovered and a safety. Smith was nominated for Pepsi NFL Rookie of the Week three times, winning the award twice.