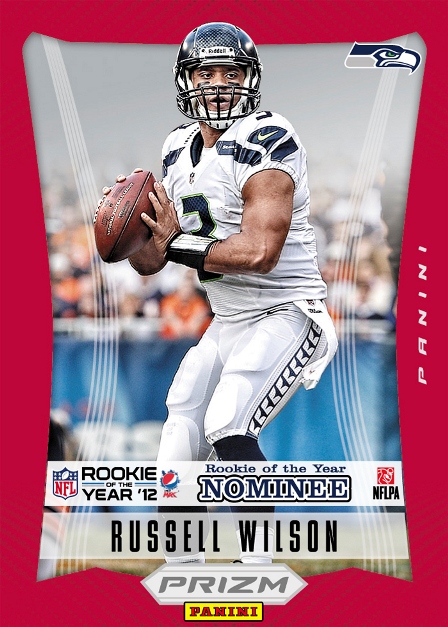 The payoff for collectors and NFL fans everywhere has been some pretty sweet virtual cards highlighted on NFL.com each week in a special Pepsi Rookie of the Week gallery, across social media platforms and the NFL.com rookies voting page. But now the stakes have been raised. The 17 weekly winners have been whittled down to the five most impressive rookie performers who will now vie for 2012 Pepsi NFL Rookie of the Year honors.

Vote now for your favorite choice at NFL.com, then share the image of the 2012 Pepsi Max Rookie of the Year nominee you voted for on your Facebook page. In addition, post the image on the Panini America Facebook page (after you “like” us if you haven’t already) or simply comment with the nominee you voted for. On Twitter, use the hashtag#PepsiMAXROW and mention @PaniniAmerica to Tweet out the card image of the rookie you voted for. For doing those things, you’ll be eligible to win special prizes. Oh, and there just might be a special payoff at the end of the season.

The five finalists were selected for their outstanding performances throughout the 2012 NFL season.  Each week, five nominees were chosen for the Pepsi MAX NFL Rookie of the Week and NFL fans voted for the winner on NFL.com.  Those results were used to help determine the finalists.

Now, a closer look at the finalists: