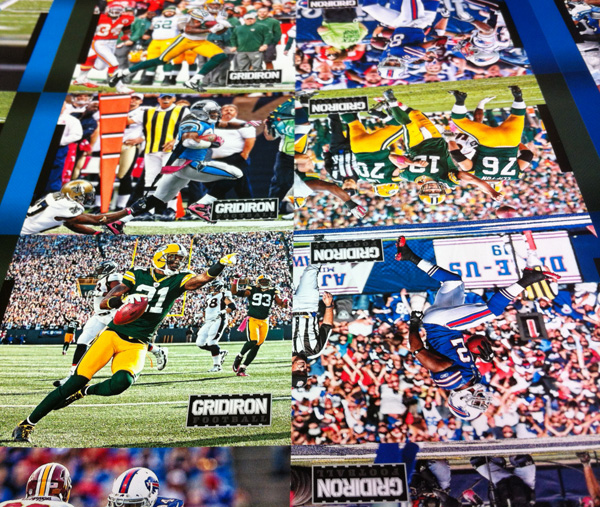 Ladies, gentlemen, distinguished guests, members of the Trading Card Academy, we respectfully submit to you today that the award for Best Photography in a 2012 NFL Trading Card Set already has been won -- even if the set in which it appears has yet to release.

Ladies, gentlemen, distinguished guests, members of the Trading Card Academy, we respectfully submit to you today that the award for Best Photography in a 2012 NFL Product already has been won — and the set in which appears hasn’t even released yet.

The evidence to substantiate our submission can be found in the fascinating gallery below detailing — quite simply — some of the most dynamic, emotional and action-packed imagery featured on football cards in a long, long time.

It represents more than just the very essence of Sunday afternoons in the NFL, it also represents one of the fundamental reasons Panini America officials decided to change the name of an entire product. Gridiron Gear Football is no longer. Next Wednesday, 2012 Gridiron Football will take its place.

“This is a set where design gave photo the freedom to show these players doing something other than just running or just throwing or just catching,” said Jeff Olson, Panini America Photo Manager. “You can find great examples of those shots in virtually every other product we make. But Gridiron provided us the opportunity to showcase the unique personalities of the players or those poignant, sentimental moments from particular games or plays or celebrations that never get their due. In 2012 Gridiron Football, they do.”

There’s certainly much more to 2012 Gridiron Football than a new name and knockout photography (such as the calling-card Rookie Hidden Gems pull-out autographs, the vaunted Xs and Os parallels and the venerable Gridiron Kings), and we’ll have extensive previews of all of those things and more next week right here on The Knight’s Lance.

But today is all about peeking just some of the award-worthy base-card scenery sure to have football collectors buzzing. In fact, we’re so enthralled with what we saw during the QC process earlier this week that we’re going to preview some of the most compelling photography over the course of three consecutive posts, starting with today’s.

THE KNIGHT’S LANCE SECOND BLOGOVERSARY CONTEST ALERT
As part of our continued countdown to next week’s second blogoversary of The Knight’s Lance, we’re going to sneak the second blogoversary logo onto one image in today’s gallery, one image in tomorrow’s gallery and one image in Sunday’s gallery. Your task is to find the three images over the next three days that include that logo and post the names of all three images (which is listed below the card in the rotating gallery) as a comment TO THIS POST. Entries are due by the end of the day Sunday and one winner selected at random from all correct entries will win a special uncut sheet of 2012 Gridiron Football.