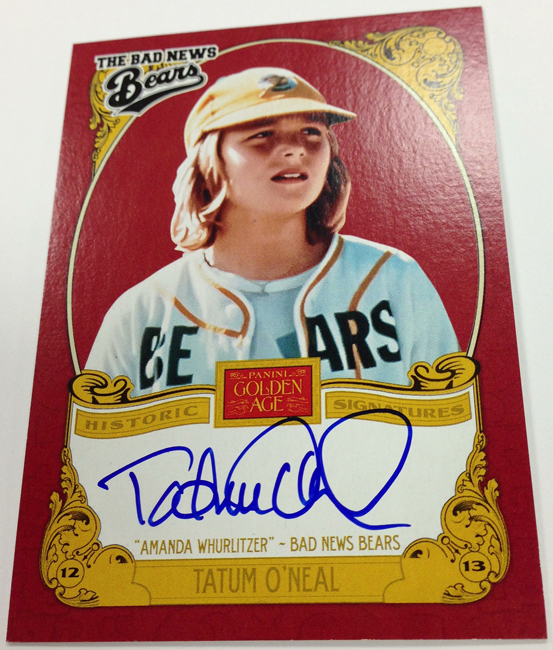 Later this month, Panini America officials will bestow upon one of the greatest sports films of all time collecting’s version of a lifetime achievement award: The historic first “Bad News Bears” trading cards and autographs inside the 2013 Golden Age Baseball release.

Those last six scene-stealers are at the heart of Golden Age’s “Bad News Bears” content that includes base cards, mini parallels and the all-important on-card autographs.

“We wanted to add some element of the ‘The Bad News Bears’ from the earliest planning stages of the second Golden Age release, and we began working on that even before 2012 Golden Age was shipped,” says Panini America Brand Manager Mike Payne. “That film is a classic and fits perfectly into the Golden Age brand. Licensing became the biggest hurdle, and deals with studios can take some time to reach an agreement. Once that was completed, Paramount provided imagery of the six principles we were in negotiations with, including Tatum O’Neal and Jackie Earle Haley. It wouldn’t have been the set we wanted without Amanda and Kelly Leak.

“There was some concern that Tatum might not want to be a part of the project, but she was great throughout the entire process and even sent a thank-you note with her cards that read, ‘Everyone, Thanks so much for everything! I really appreciate it.’ She then signed with an ‘XO’ next to her name. It’s a little thing, sure, but still a nice gesture.”

Cavagnaro, who lives in the Dallas area, has visited Panini America headquarters on two different occasions during the last few weeks signing his cards for the set. Stay tuned to The Knight’s Lance for an exclusive interview with Cavagnaro in which he shares his recollections on filming a movie that most definitely stands the test of time.

You can check out a complete gallery of the history-making Bad News Bears cards coming to the late-June release of 2013 Golden Age Baseball below. But before that, we’ll leave you with this gem of a memory that Cavagnaro shared with Payne.

“He’s got great memories of making the film, including how hot it was during filming and how the field was actually built for the film in an area where there wasn’t much around,” Payne says. “He recalls Tatum pitching the ball over his head a couple times, then turning around and shaking his head when he’d hear Tatum’s father – actor Ryan O’Neal – shout ‘Good pitch! Great job!’ to his daughter.”