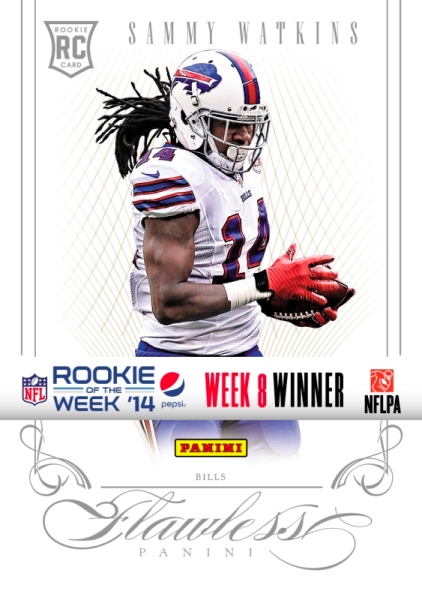 Voters on NFL.com have made their choice (again). Wide receiver Sammy Watkins of the Buffalo Bills is the Week 8 2014 Pepsi NFL Rookie of the Week , making it the second week in a row and third time this year, the NFL announced today. Watkins had three catches for 157 receiving yards and a touchdown, in the Bills’ 43-23 win over the New York Jets.

Watkins was selected from among five finalists through fan votes on NFL.com. The others include:

After the regular season, five players will be nominated for 2014 Pepsi NFL Rookie of the Year honors. In conjunction with the 2014 Pepsi NFL Rookie of the Week promotion, Panini America produces virtual trading cards of each week’s five nominees and a virtual card for each week’s winner. At the end of the regular season, Panini America will produce an actual trading card set of all weekly winners. Stay tuned to The Knight’s Lance for additional details.