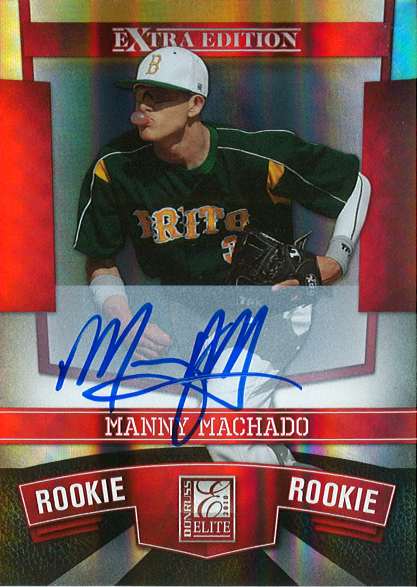 In a development earlier this week that was as completely unexpected as it should be universally embraced by the passionate prospecting community, highly touted Baltimore Orioles prospect Manny Machado finally returned his 2010 Donruss Elite Extra Edition autographs.

In a late-breaking development that was as completely unexpected as it should be universally embraced by the passionate prospecting community, highly touted Baltimore Orioles prospect Manny Machado finally returned his 2010 Donruss Elite Extra Edition autographs to the company.

But no one, it should be noted, is happier with this special delivery than Panini America Brand Manager Mike Payne, who developed 2010 Donruss Elite Extra Edition and who’s spent more than a year diligently chasing the safe return of Machado’s coveted signatures.

“All redemptions are frustrating, but this one maybe more so than others because of Machado’s draft standing and because the cards had been sent out well before packout,” Payne said Friday. “But as the EEE release date drew near and the Machado cards had not been returned, we had to keep calling the agent to see what the situation was. Packout came, packout went, and no Machado autographs had been returned to us.”

That, of course, forced Panini America officials to insert what have become some of the most scrutinized redemption cards in baseball over the last year — a necessary evil in situations such as these.

In the months that followed, Payne and members of the Panini America acquisitions department doggedly worked their phones and email address books in an effort to get Machado’s autographs back in house. But as of earlier this week, the cards remained MIA.

But then earlier this week, unannounced and sealed in a rather nondescript cardboard box, the cards were returned — signed, sealed and delivered.

“After the product shipped, we continued the regular follow-up calls hoping to get any information,” Payne said. “Finally, we learned Manny had changed agents so we had to go back to square one and start over with someone new. Samantha Newman in our acquisitions department was key in getting a dialogue with the new agent, and getting the cards signed and returned as quickly as possible.”

Collectors currently holding redemptions for the signed Machado base and insert cards can finally rest easy, knowing that the long overdue penmanship from this prized prospect is now just days away from being redeemed.