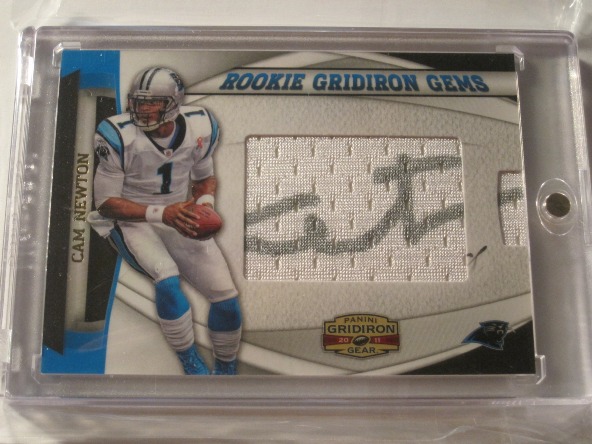 One of my favorite products that I look forward to every year is Panini America's Gridiron Gear. I started back in 2009 and I haven’t quit since. This year was no different.

One of my favorite products that I look forward to every year is Panini America’s Gridiron Gear. I started back in 2009 and I haven’t quit since. This year was no different.

I was able to do a full 16-box master case that I purchased from LB’s Sportscards, a hobby shop located here in Omaha, Neb. We were both impressed right away by the memorabilia cards and both of us had some great luck. Some products seem and feel different year after year, and although the design changes every year, there is one thing from busting 2011 Gridiron Gear that remained the same from when I did 2009 and 2010: It feels like Gridiron Gear.

What I enjoy the most about Gridiron Gear is the different variations of the Rookie Gridiron Gems memorabilia cards. You have the single, double and triple, as well as autograph versions of those variations. I like this concept because instead of always pulling a memorabilia card that is just a single-memorabilia swatch, you can pull one that’s a double or triple, and you can get some great patches from these cards. My two best in this particular case were a Vincent Brown dual with part of the Chargers lightning bolt and a Stevan Ridley triple. These cards can get very unique. As a collector, I like how no one card is the same as the next.

As for a mixture of veterans and rookies, Gridiron Gear can be rookie heavy. But what I like most about Gridiron Gear is that there seems to be a better balance between rookies and veterans than in other products, except for maybe National Treasures. For me, I prefer rookies. I always have. But even if you’re a veteran collector, this case had a good amount of veterans, including nice Randall Cunningham and James Lofton rubber helmet autographs.

Some of my best patch cards came from the Game Breakers set, including BenJarvus Green-Ellis and Mike Wallace. My lone Plates and Patches memorabilia card was a very nice three-color/four-color dual patch of Antonio Gates. The patch cards of the veterans in any Gridiron Gear product can be downright dirty sometimes, complete with grass stains, paint from the helmet, sweat stains, ripped or damaged jerseys, etc. They are also some of the best patch cards I see from any product all year.

I pulled a lot more Rookie Gridiron Gems pullout autographs than I was expecting from this product. The best pull of the evening was obviously the Cam Newton. I also pulled Ryan Mallett, Von Miller, Jonathan Baldwin, Titus Young and Marcell Darreus just to name a few. I was not disappointed by the rookie pullout autographs from this year. It appears that the autographs “pop” more from the markers used this year than from 2010. At least it appeared to in the ones I received.

I have a Dez Bryant from last year where you can’t really tell there’s an autograph at all as the silver marker is very faded on the home-jersey piece. It appears to be a jumbo jersey if you take a quick glance at it.

Now one of the big question is “How many redemptions?” In my 16-box case, there were just four. Now maybe I just got lucky, as I only did one case, but to purchase a case with only four redemptions, well, I’ll take that any day. Another question may be “Duplicates?” There were a few. Once instance was two redemptions of Aldrick Robinson, two of Dion Lewis (with one being a short print out of 25), and the other instance was a Rookie Orientation triple jersey of Julio Jones, Jake Locker and Ryan Williams. In my opinion, that is a good problem to have. That is, if you want to even call it a problem to begin with.

Now there can’t be all positives without a few negatives. By and large, these are simply “nit-picky” things I observed. The Rookie Gridiron Gems have the team name toward the bottom of the cards. If you happen to pull one of these with an autograph, the autograph sticker is directly on top of the team name. The team name is a black font with a fade effect, but really clashes with the sticker autograph. I didn’t happen to pull one of the Rookie Gridiron Gems with an autograph, but I have seen them. I wish the team name could have been put on the right side of the card vertically. Some collectors may agree, some it may not bother. But I just felt this was something that could have easily been corrected.

The only other thing is the NFL Nation design seems a bit too much. Pulling a red memorabilia card can blend in with the design, or having a multi-colored patch that has colors that don’t match red and white can seem a bit “off.” Most cards I have seen, this isn’t a huge issue, and I do applaud Panini America for having more designs that fit the title of a set.

2011 Gridiron Gear takes what the brand has done well over the years and continued to build on that. From singles, doubles, triples and even quad memorabilia cards, it all somehow seems to just “work.” Gridiron Gear is a fun break. Some of the best cards in my collection have come from Gridiron Gear — and that is saying a lot. I can’t say that about any other product.

Gridiron Gear is just a fun product with great patches and it’s the only product where the rookie autographs slide out. I have never had a problem with any Gridiron Gear case I’ve done. And just as I have with 2009, 2010 and now 2011, 2012 Gridiron Gear will certainly be on my list of products to bust next year.

9 Replies to “Case In Point: One Collector’s Take on 2011 Gridiron Gear Football (with Hit Gallery)”