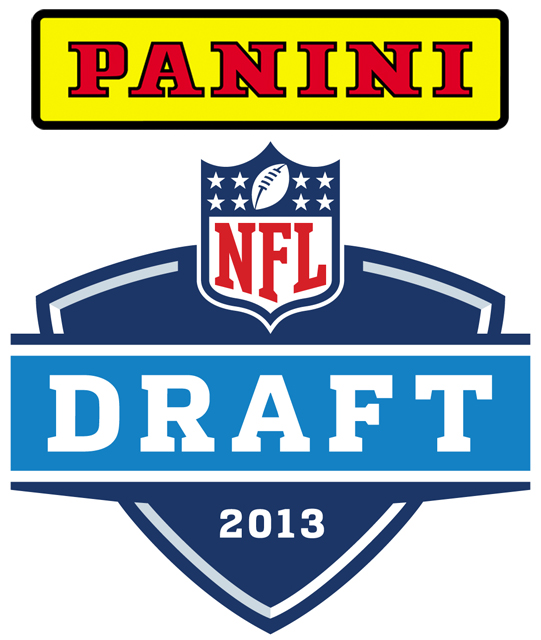 Mel Kiper Jr. has nothing on Jason Howarth, Panini America's Boston-bred Vice President of Marketing. For Howarth, next week's 2013 NFL Draft is something akin to Christmas. Howarth is an unabashed NFL draftnik. He loves the stuff. So when he proposed the idea of conducting the inaugural Panini America mock draft a few weeks ago, we jumped at the opportunity (partially because he's the boss, partially because it was a great idea).

Mel Kiper Jr. has nothing on Jason Howarth, Panini America’s Boston-bred Vice President of Marketing. For Howarth, next week’s 2013 NFL Draft is something akin to Christmas. Howarth is an unabashed NFL draftnik. He loves the stuff. So when he proposed the idea of conducting the inaugural Panini America mock draft a few weeks ago, we jumped at the opportunity (partially because he’s the boss, partially because it was a great idea).

But whereas most secular mock drafts this time of year focus on individual team needs or best-player-available discussions or directional trading, there is only one criteria that matters in the inaugural Panini America mock draft: Collectibility. Who are the 32 most collectible rookies coming into the NFL this year? The answers to that question not only drove the seven Panini America officials who participated in this draft, they will also drive the Rookie Card content of every last one of Panini America’s 2013 NFL trading card products.

Those were the marching orders used by Panini America’s Howarth, Ben Ecklar, Aik Tongtharadol, D.J. Kazmierczak, Tim Franz, Scott Prusha and Tracy Hackler. One by one below, our mock drafters lay out their picks for the 32 most collectible rookies of 2013, each offering a few words of rationale at the top of their list. In addition, we also gave each man an additional “wish pick” — that is, which top rookie they’d select for their favorite NFL team. For that pick, we’ve also mocked up a 2013 Score Football Rookie Card just to bring things home.

So, without further ado, we proudly present the Panini America 2013 NFL Mock Draft. Enjoy — and stay tuned next week when Panini America, the official and exclusive trading card partner of the NFL Draft, reports on all of the action live on location from Radio City Music Hall. 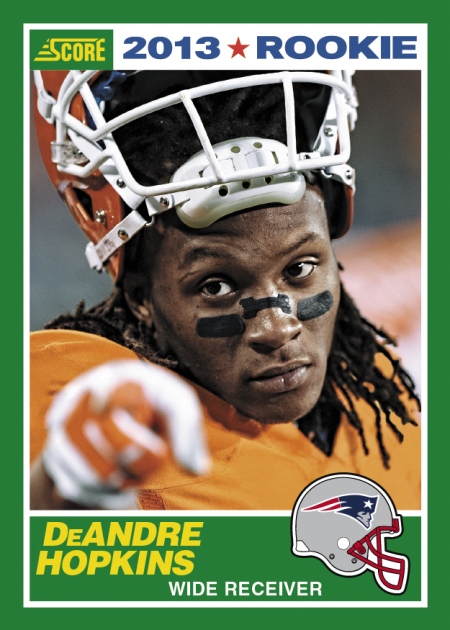 Overview:
If last year’s NFL rookie excitement was all about the QBs, this year’s is all about the WRs from a collectibility perspective. You have to  be excited with each of the top WRs and their ability to step in and have a more immediate impact on their team than any other position in this year’s draft – especially when you consider that they will likely be going to teams with established QBs. It is the most dominant spot in my mock draft with 10 overall picks, including my wish list WR for the Patriots – Clemson’s DeAndre Hopkins. The next most-collectible position in my draft for this year is QBs with nine picks, including Denard Robinson, projected to play WR in the NFL. He’s definitely a surprise in my top 32 but I couldn’t pass up a Michigan guy!. The RB spot comes in with five picks in my mock, including Marcus Lattimore at No. 32. He was projected to be a top 10 pick before he got injured. If ever there were a case to be made for collecting a rookie RB and holding on to him, it’s Lattimore. Rounding out the offensive side of the ball, I took two TEs in my top 32. The emergence of dominant, game-changing TEs in the NFL can’t be overlooked, and both Eifert and Ertz could very well continue that trend. I took defensive players with six of my 32 picks and, while we often have discussions internally about the value of defensive players, it’s hard not to think these guys won’t be collectible even if they don’t command the collecting dollars that offensive players do. There were a number of occasions as I narrowed down my 32 picks when I wished I had more so I could take some defensive guys that I think will be fun to watch. Ultimately, though, they ended up on the sideline. Fake girlfriend or not, I still slotted Manti Te’o at No. 13 in my mock as he will be interesting to watch. 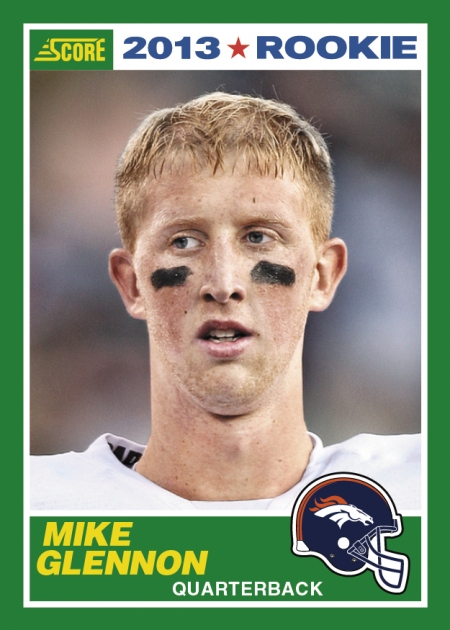 Overview:
My rationale was collectibility and also trying to consider team need while knowing that this is in no way how the draft will go. Most of these players will end up on different teams. For example, the Chiefs won’t draft a QB at No. 1 now, so that takes Geno Smith off of my draft board there even though, from a collectibility standpoint, he might be the most marketable guy. 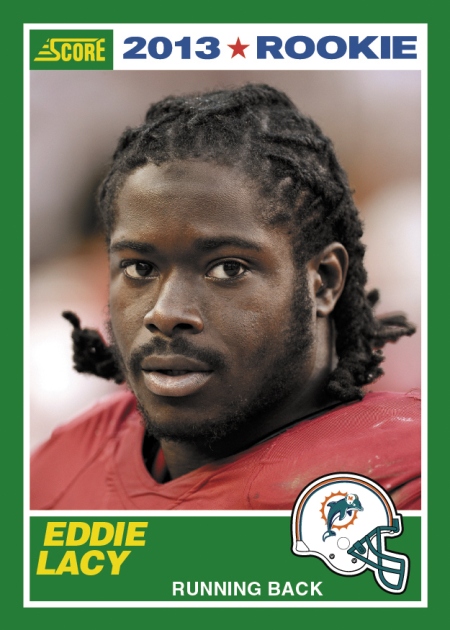 Overview:
Let’s face it, with Russell Wilson, Andrew Luck and RG III, who knows what the prototypical NFL QB looks like anymore. Hence, you will find five QBs in my top 10, including the rifle-armed Mike Glennon. Quarterbacks always lead the charge in collectibility, and this year’s QB class will undoubtedly astound us all.  No one will dispute that Eddie Lacy is the best RB in the draft, and in terms of natural ability and downright beastliness, the potential is limitless for this fleet footed 230-pound tailback. Let the “bro-mance” begin as I am vying for the Dolphins to select him with their first pick – 12th overall. The Houston Texans are one “Welker-type” receiver away from a Super Bowl and Texas A&M’s Ryan Swope, with his size and deceptive speed, will have fans booking last-minute trips to NYC. Don’t forget about my 32nd pick – the Honey Badger. Tyrann Mathieu will continue to capture national attention and, with any luck, his playmaking skills are how he will make his mark in the NFL. Finally, we are all speculating on the depth at WR and I believe names like Austin, Hunter and Allen will be household first names come December, provided that they land on the right teams. 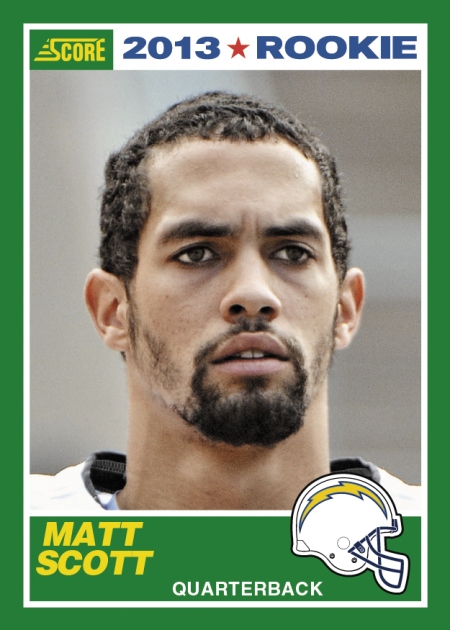 Overview:
Impact offensive skill position drives this hobby; we want to see the next generation of young stars make an impact early on and not let up — just as we saw in 2012. My mock draft includes all offense all the time, from the first pick through the 32nd, and they’re all ready to have an impact now . . . like the extremely mobile quarterbacks from the last two drafts (RG III/Colin Kaepernick/Russell Wilson/Cam Newton) . . . the workhorse backs that just keep on going (Alfred Morris/Doug Martin/Trent Richardson) and are always ready to make quick transitions to the NFL . . . the  dependable wideouts (A.J. Green/Julio Jones/Justin Blackmon/Michael Floyd) . . . and  the versatile, athletic tight ends flying by linebackers (Rob Gronkowski/Jimmy Graham). Player comparisons from the 2013 class to current NFL players have already been made; including comparisons to Kaepernick, Wilson, Sam Bradford, Steven Jackson, LeSean McCoy, Maurice Jones-Drew, Jones, Reggie Wayne, Percy Harvin, Anquan Boldin and Jason Witten. In all I picked four QBs, 10 RBs, 13 WRs and five TEs. 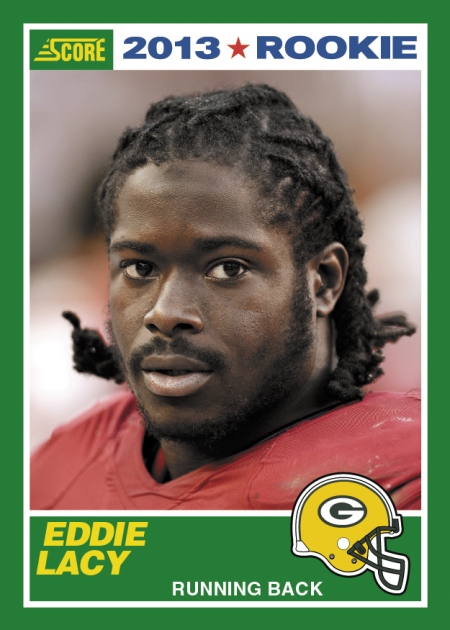 Overview:
The challenge with picking players this early is balancing college performance and following with NFL potential without knowing what team they will eventually land on. While the QB situation isn’t as top-heavy as the 2012 class, I still think some of the mid-round guys will be intriguing upside plays for the future, in particular Matt Scott and Zac Dysert. I found the last four or five spots to be the most difficult. I just missed on Mike Gillislee, Andre Ellington, Le’veon Bell and Cierre Wood although they have shown decent early-year returns. For my wish pick, I’d love to see the Packers realistically land Eddie Lacy. Over the past three seasons, the Packers are league-worst in yards per rush and rushing touchdowns. This is a good chance to pick up a quality player while not having to reach for him. 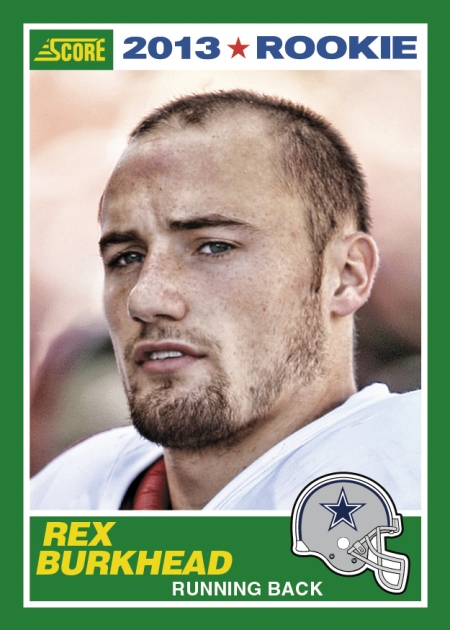 Overview:
Collectors love their quarterbacks, and if you look back on values over the years, the key QBs not only top the list, but the next level of signal-callers still carries a slight premium over star runners and receivers. It was hard to rank the RBs and WRs before you see where they will land, but a lot of guys in the right situation could make a big jump. That’s why I picked a guy like Landry Jones to rank toward the top before the draft because collectors will go for name value vs. situation until draft day. Speaking of name value, I have Manti Te’o and Tyrann Mathieu up higher because of their name recognition and strong school collector base. I went with a homer pick for my wish pick, but if it wasn’t for injuries, Rex Burkhead would rank higher and would be getting more draft buzz. He could be a steal and a great compliment for DeMarco Murray if the Cowboys got him late — and his cardboard would go through the roof. 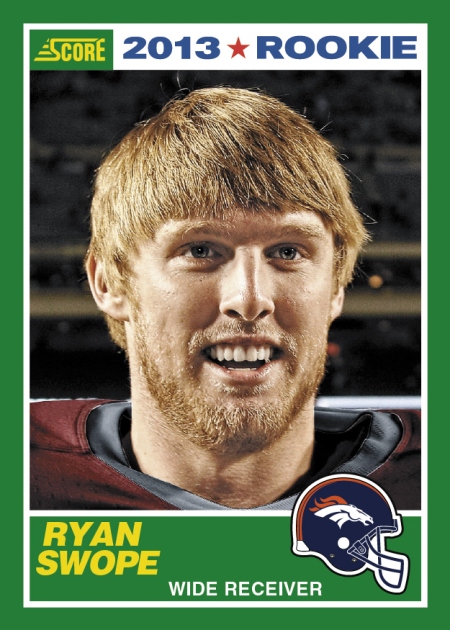 Overview:
If you mix a lot of what my distinguished colleagues Tim Franz and Ben Ecklar said above, you’ll have a general understanding of my rationale for the following 32 picks. I’m a firm believer in the “Offense Sells Trading Cards” philosophy and with precious few exceptions (Manti Te’o being one and my man-crush-in-waiting, Tyrann Mathieu, being the other), my draft is completely dominated by offense. Speaking of budding bromances, I’d be over the moon if the Broncos somehow landed Texas A&M receiver Ryan Swope at No. 28. He’s tailor-made to be a bone fide slot machine, and the prospects of him learning under Peyton Manning and Wes Welker are downright dreamy. In fact, if my Broncos play their cards right (pun intended), it’s possible that they end up with both of those collecting targets next week in real life. Unfortunately, for the purposes of this draft, they don’t.