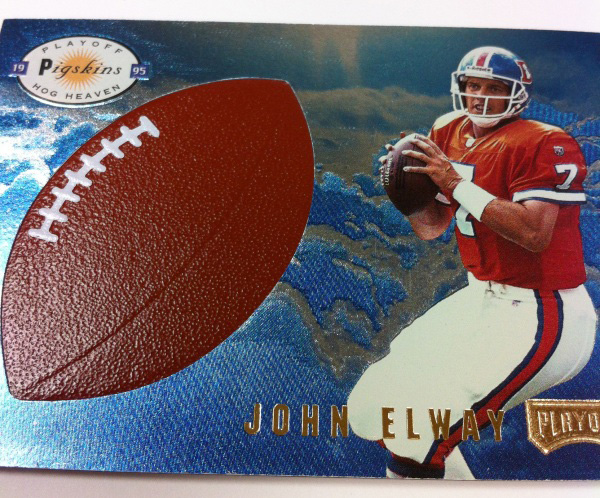 I apologize if you had to hear about it on a now-deleted message board thread. Alas, that doesn't make it any less true. I'm a collector. I have been since 1977. And last weekend I lapsed -- big time -- back into the lavish, leather embrace of an old love: 1995 Playoff Contenders Football and its magnificent Hog Heaven insert set.

I apologize if you had to hear about it on a now-deleted message board thread. Alas, that doesn’t make it any less true. I’m a collector. I have been since 1977. And last weekend I lapsed — big time — back into the lavish, leather embrace of an old love: 1995 Playoff Contenders Football and its magnificent Hog Heaven insert set.

I was hoping my wife wouldn’t find out, but I guess the horsehide’s out of the barn now.

It started innocently enough late last week when I discovered that our Panini America NFL product gurus are — cue the trumpets! — revising the Hog Heaven name for an autographed insert in the upcoming 2012 Limited Football. From there, it spiraled out of control.

Almost immediately, I was thrust back in time 17 years to my first torrid affair with this seminal insert and the seemingly countless number of 1995 Playoff Contenders Football boxes I opened chasing it. Something — everything, really — about Hog Heaven spoke to me back then. It still does.

The perfect design (highlighted by the etched-foil brilliance of the vibrant blue sky and accentuated with perfectly-placed gold foil); the nothing-but-leather backs and their comic-bookish player likenesses; the pungent pigskin scent that only real leather can emit; and the fact that Hog Heaven was one of the first inserts in trading card history to incorporate genuine leather (Playoff’s 1995 Absolute Pigskin Previews from earlier that year were the first).

For me, it was a dreamy (heavenly, even) combination of card-collecting characteristics that I couldn’t resist. I fell head over hooves for Hog Heaven, cracking way more 1995 Playoff Contenders than I could afford back then as a lowly editorial assistant at Beckett Publications.

Fast forward to the present again. By late Saturday night, all of this talk about bringing the name back in 2012 Limited Football had me looking for love on the Internet. I turned to eBay and quickly pulled the trigger on the John Elway and Shannon Sharpe gems from the set. For a grand total of $15.49 including shipping, I nabbed two of my favorite players from my favorite team from my favorite insert. It didn’t seem to matter at the time that I already had them. Hey, I’m a collector.

By Monday morning I had become the unwitting subject of a somewhat-heated, somewhat-humorous thread on the Blowout Cards forum that unfortunately has since been removed. My eBay ID was included in the thread, along with questions about, among other things, why, exactly, I bought those particular cards. Were they for a Panini America BuyBack program? Wouldn’t it be funny if the respective sellers sent me redemptions? (Full disclosure: I did laugh at that one.)

To be frank, the reason I bought those cards — and the reason I’ll likely buy more in the near future — is because I love them. Indeed, I’m a collector. Of Broncos past and present, of Tim Tebow, of both AFLs (the Arena Football League and the Australian Football League), of the UFC, of Eminem, of . . . many things.

And I’m not alone. One of the many great things about Panini America is that I’m surrounded every day by folks who are as passionate about collecting as I am. My office mate, Scott Prusha, collects Nebraska Cornhuskers, Dallas Cowboys and George Brett. Marketing comrade Chris Reed collects Oklahoma Sooners. Panini Authentic’s Brian Bayne collects the Washington Redskins (and interoffice ridicule as a result).

The list goes on . . . and on . . . and on. The point, of course, is that many of us here at Panini America were collecting trading cards long before we were making and promoting them. It’s in our blood. It’s what we do. We build complete sets, we likely spend too much discretionary income on pursuing them (no freebies here) and, yes, we even chase down insert cards that we first fell in love with almost two decades ago.

You can’t believe everything you read on the collecting message boards, but you absolutely can believe this: I’m a collector — and proud of it. Let’s see a new thread started on that.