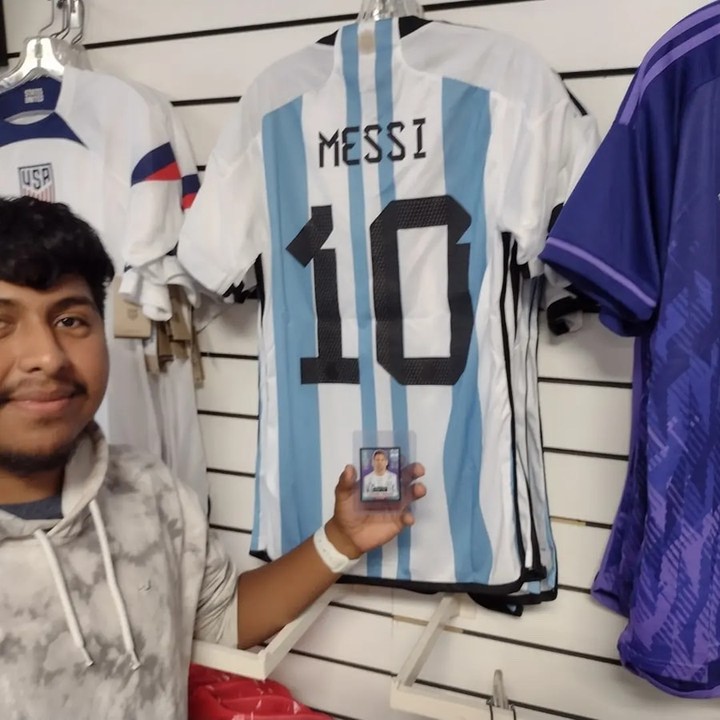 Whole lotta money was made at the @SeniorBowl this week.

Watch highlights from the class of 2023's practices in Mobile:

Stories like this have become legends in our Hobby. A collector innocently opens a pack of cards, only to pull a life-changing product hit! As collectors, and amateur treasure hunters, we all love to hear these stories. They keep us opening packs, boxes and cases. It’s the thrill of the chase that brings many to our Hobby. Well, back in late September of 2022, a similar event took place in a family-owned soccer specialty store called Strictly Soccer in Midlothian, VA. The popular Panini FIFA World Cup Sticker Collection had been in stores for less than a month. 20-year-old, Henry Barrios, was visiting his local soccer shop looking for a jersey and Panini World Cup Stickers. Henry purchased two 50-pack boxes of the stickers, and took them home to open, unaware of the treasure inside.

Shortly after, Henry was home tearing through the sticker packs, after all – he was trying to complete his Panini World Cup Sticker album. After opening 70 packs, he came across something special…

What Henry had found was a Lionel Messi sticker with a Black border. This was not just any Lionel Messi World Cup sticker, this was THE Messi 1/1! This particular sticker was a legend before the product was even distributed. Fast forward three months later and Lionel Messi and Argentina win the World Cup Tournament, which is likely to be Messi’s final World Cup appearance and his final appearance in Panini’s popular World Cup Sticker Collection. Checking the final box in Messi’s storied career, and placing him at the top of many soccer enthusiasts’ all-time player list.

I recently had a chance to chat with Henry about pulling the Messi 1/1 sticker, what that felt like in the moment, and after watching Argentina take home the trophy.

Hey Henry! Thanks for sitting down with me to talk about your amazing sticker pull! Tell us a little about you as a collector? Have you been collecting soccer stickers or cards long?

HENRY: I haven’t been collecting long.

Q: Do you collect any players or any products in particular?

HENRY: Yes! From beginning to end.

Q: Tell us about the shop (Strictly Soccer) you bought the box from. Do you go there often?

HENRY: Yes, I bought a jersey and some panini soccer boxes. The staff is wonderful and nice, and the place is a good environment.

Q: What did you have going on the day that you went to the shop? Was it just a normal day?

HENRY: It was a normal day. I went to work that day, and I got off early, so I went to the store and bought two panini boxes and took them home.

Q: You didn’t open the packs at the store, you waited until you go home – tell us about that.

HENRY: I got home and opened them. When I saw what I got I showed it to my family and they got happy and I got excited, as well.

Q: How many packs had you opened before you say the Messi 1/1?

Q: What was your first thought when you saw the Messi sticker? Were you aware that the black border 1/1s were in this product?

HENRY: I was surprised and I didn’t know what to do! I honestly did not know what to do. I was a little aware of the (black) border, because the store told me about the new 1/1 formats.

Q: Have you ever pulled a sticker or card that’s that special and valuable?

HENRY: Nope, I haven’t had one that important.

Q: Since pulling the sticker, have you had a lot of offers on the sticker?

HENRY: Yes, some people have reached out to us.

Q: Are you planning to keep the Messi sticker or are you wanting to sell it?

HENRY: Yes, we are planning to sell it.

Q: If you plan to sell it, what would you like to do with the money. That is a very valuable sticker!

HENRY: I would like to help my family out, and help them move forward.

Q: How did it feel to see Messi win the World Cup after you pulled (arguably) his most important collectible from 2022?

HENRY: Ever since the World Cup 2022 started I always had faith in the Argentina team, and hoped they’d win. Since I was young I always loved seeing Argentina play. I am a big Messi fan!

Q: Did you fill up your sticker album?

HENRY: Yes, I completed it.

I really appreciate your time, Henry! Thank you for chatting with me!