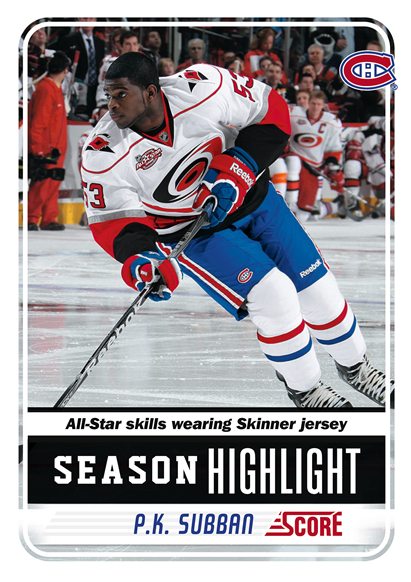 Give P.K. Subban credit for his uncanny ability to win over a crowd. Give Panini America credit for doing the same.

Give P.K. Subban credit for his uncanny ability to win over a crowd. Give Panini America credit for doing the same.

The hockey world watched with wonder as Subban worked some wardrobe wizardry during the 2011 NHL All-Star Game’s SuperSkills competition in Raleigh, N.C. The Montreal defender approached Carolina rookie sensation Jeff Skinner on the ice and asked if he could wear his jersey during the Breakaway Challenge. Skinner obliged. The hometown Hurricanes went nuts.

The rest is hockey — and hobby — history.

Here’s where the story takes a decidedly collectible turn. Panini America officials took possession of that special dual-donned sweater not long after the All-Star Game and waited for the perfect opportunity to introduce it into a product. That product, 2010-11 Dominion Hockey, arrived last week, carrying among its incomparable contents five Emerald parallels of Subban’s autographed Rookie Cards embedded with prime pieces of the Skinner jersey. There are also five Emerald parallels of Skinner featuring pieces of the jersey.

The first Subban card hit the secondary market over the weekend with a robust Buy It Now asking price of $5,000.

The All-Star moment also will be immortalized on Subban’s card in the upcoming 2011-12 Score Hockey, which hits
the market in late October.