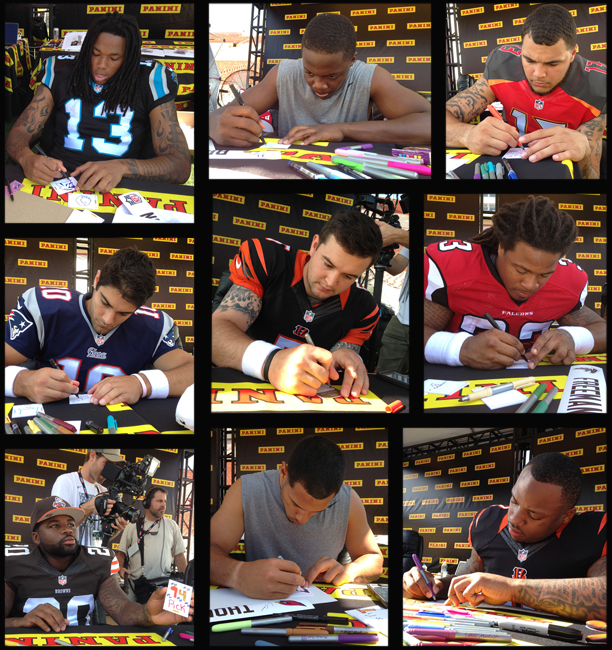 You can learn a lot about an NFL rookie by giving him nothing more than a few colored Sharpies, 2 1/2 by 3 1/2-inch cardboard canvas, about five minutes and one simple two-word request: Draw something. What you’re likely to discover — as we have at Panini America over the last several years during the NFLPA Rookie Premiere — is that the resulting artwork is sometimes primitive, sometimes surprisingly good, never boring and always unique; as one-of-a-kind as the players who created it.

In years past, we’ve asked the rookies to draw whatever they wanted, which often meant paying artistic homage to their hobbies, their hopes, their hometowns or their heroes like only they can. But during the 2014 NFLPA Rookie Premiere in late May, we gave them more pointed instructions to sketch either their new team logos or something that illustrates their path to the NFL.

As a kid who spent way too much time in Texas public-school classrooms unsuccessfully trying to freehand my own favorite NFL logos on notebooks, spirals, book covers and appendages, I have a keen understanding of just how difficult the task can be — even after years of practice. So you can imagine the amusing consternation that initially gripped most of the rookies when we put them on the spot to do the same thing this year.

But fueled by senses of adventure, entertainment and good, old-fashioned competition, the players got down to work, whipping out their smartphones or helmets for reference material before unleashing their inner Picassos. The resulting miniature masterpieces hint at the hidden artistic talent of some rookies, and the can-do spirit of others. All of them, it should be noted, render even my best grade-school scribblings completely inadequate. To complete the art project, each player autographed the back of his sketch.

Of course, we say all of that to say this: Next week during the 2014 National Sports Collectors Convention in Cleveland, Panini America will begin releasing the new wave of original NFL Sketch Cards produced at the 2014 NFLPA Rookie Premiere.

These hand-crafted creations will instantly become some of the most unique trading cards on the market. We’ve provided a rich art exhibit of sorts in the gallery that follows. Before you check it out, a few thoughts: