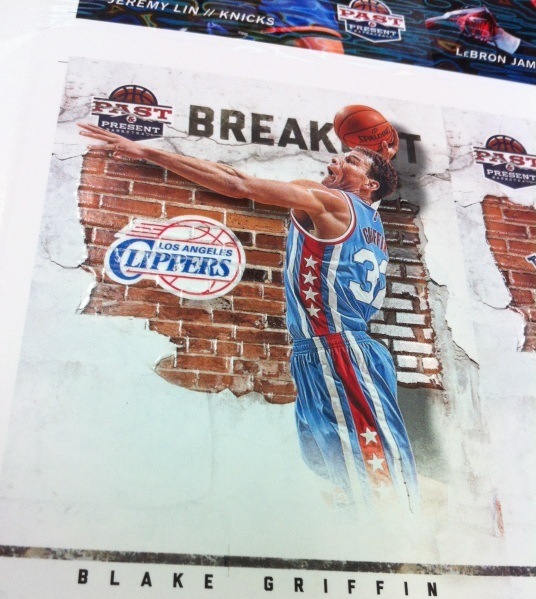 Remember last weekend, when The Knight's Lance previewed digital images of the captivating Fireworks and Raining 3s inserts that will begin packing out inside Panini America's 2011-12 Past & Present Basketball early next week?

Remember last weekend, when The Knight’s Lance previewed digital images of the captivating Fireworks and Raining 3s inserts that will begin packing out inside Panini America’s 2011-12 Past & Present Basketball early next week?
At the time, I was grasping for ways to describe the planned uniqueness of these two sets, using phrases like “wow-factor printing technology,” “high-gloss, spot-UV,”  “raised relief” and “tangible dimensions.” I also noted last weekend that neither words nor flat-scanned JPGs could truly do these beauties justice. But today I found something that could.

Just outside of Panini America VP of Marketing Jason Howarth’s office, I unintentionally ambled into a high-powered powwow that included VP of Production Stephanie Carlson, NBA Brand Managers David Porter and Keith Hower, and one impeccable uncut sheet of, well, wow-factor printing technology.
After a few sincere “ooohs” and “aaahs,” I managed to commandeer the “100-up form” from Carlson and spent several quality minutes staring at it, touching it, photographing it and otherwise appreciating it. This particular sheet included finished examples of Raining 3s and almost-finished examples of Fireworks. But much to my delight, it also delivered final versions of the equally tangibly gifted Breakout and Changing Times inserts.
To me, the cards — which required no less than six different passes through the press before completion — are simply sublime, seemingly inspired by Action Packed but with a matte (or soft-touch) finish that makes the glossy effects that much more striking. Of course, the fact that Breakout has an autograph parallel probably won’t hurt the pop appeal, either.
Truth be told, I could struggle all day in this feeble attempt to tell you what to expect; or I could simply show you — now that I have the chance — and let these unique inserts speak for themselves. I think you’ll like what they have to say.
Stay tuned to The Knight’s Lance next week for additional coverage of 2011-12 Past & Present Basketball.

15 Replies to “Feel-Good Story: The Tangible Difference of 2011-12 Past & Present Basketball (Gallery)”