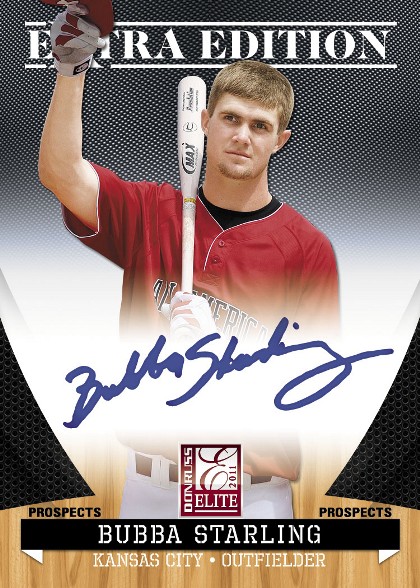 Panini America and the Major League Baseball Players Association commanded the collecting world's attention last Thursday with the industry-rattling announcement that the two sides have agreed on a multi-year trading card agreement.

Panini America and the Major League Baseball Players Association commanded the collecting world’s attention last Thursday with the industry-rattling announcement that the two sides have agreed on a multi-year trading card agreement.

Elite Extra Edition is a name that’s widely embraced by America’s most passionate prospectors and the 2011 version, due out December 21, will only strengthen the product’s proud reputation.

Some preliminary highlights include . . .

“The compilation of EEE will be familiar to collectors, but there are some tweaks to the program, including more on-card autographs than ever before,” says Panini America Brand Manager Mike Payne. “EEE still is the most comprehensive baseball draft product on the market and stretches beyond just the obvious names in the first round or a few that spill into the second round – names we do have, by the way.

2011 Playoff Contenders is tentatively slated to arrive January 11 and is highlighted by . . .

You can get the exclusive first looks at some of the cards below. Stay tuned to The Knight’s Lance for additional details as they become available.