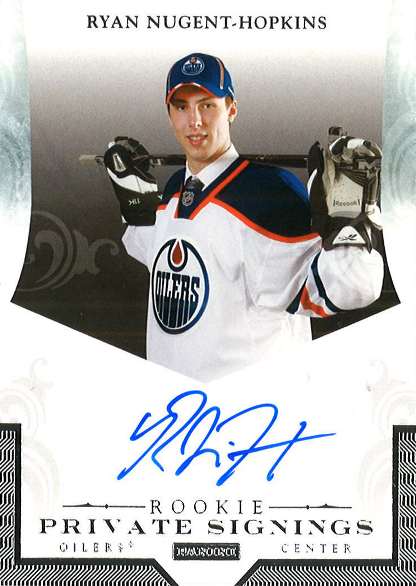 One week into the 2011-12 NHL season and things are already looking up -- way up -- for Panini America's early products.

One week into the 2011-12 NHL season and things are already looking up — way up — for Panini America’s early products.

The impressive debut performances of such headlining rookies as No. 1 overall pick Ryan Nugent-Hopkins of the Edmonton Oilers and No. 2 overall pick Gabriel Landeskog of the Colorado Avalanche and their rookie promising peers means really good things for the upcoming releases of 2011-12 Score Hockey and 2011-12 Certified Hockey.

Certified, releasing in mid-November, will include Freshman Fabrics Signature RCs of Nugent-Hopkins, Johansen, Landeskog, Connolly, Zibanejad, Gardiner and Faulk. All of those Rookie Cards will be live in pack.

Rookie Cards for both sets are feverishly being finished in the Panini America prepress department as we speak. As soon as we have approved images, we’ll post a full gallery right here at The Knight’s Lance. Until then, we thought this selection of sweet autographed cards of early season skaters (procured during the 2011 NHLPA Rookie Showcase and slated for inclusion in our later-season products) was incredibly apropos.