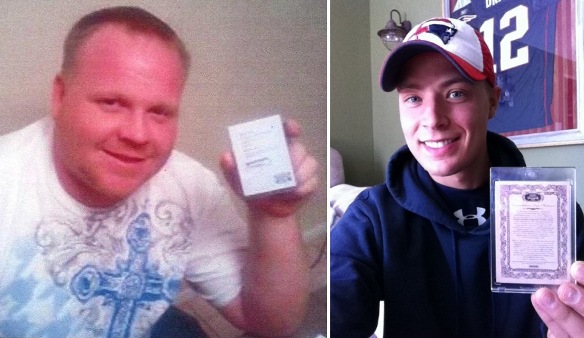 Five packs of 2010 Playoff Contenders Football. That's all 29-year-old Florida collector Michael Tucker needed. So he dropped by Wonder Water Sports Cards in Clearwater, Fla., Thursday evening after work to pick them up -- really for no other reason than to test the videoing capabilities of his new camera phone in advance of a group break next week.

Five packs of 2010 Playoff Contenders Football. That’s all 29-year-old Florida collector Michael Tucker needed. So he dropped by Wonder Water Sports Cards in Clearwater, Fla., Thursday evening after work to pick them up — really for no other reason than to test the video-recording capabilities of his new camera phone in advance of a group break next week.

The camera, as it turns out, works wonderfully.

Before the night was over, Tucker would use it to film one of the greatest video breaks in sports card history — a moving c0llectibles moment marked by the shriek of pure, unadulterated excitement and one spontaneously spewed expletive that Tucker now regrets. (Watch the following video, though, and it’s hard to find fault with the essence of his reaction.)

For what’s it worth, Tucker spent exactly $34.35 on his history-bearing five packs. In addition to the Sam Bradford Golden Ticket he also plucked two autographed Rookie Tickets and one precious-metal memory guaranteed to last a lifetime.

“I ripped the first pack open and there it was,” said Tucker, who’s been collecting since he was 7. “I still can’t believe it was me. It was very unexpected, very out of the blue. I slept with the card Thursday night. If anybody was going to get it, they were going to have to kill me first. I carried the card around with me at work all day Friday. I’d just stare at the redemption on lunch break in disbelief.”

At this point, Tucker remains undecided regarding exactly what to do with the card. If the price is right, he says he’ll sell it; but he admits that anything less than Aaron Rodgers Golden Ticket money (around $2,300) probably isn’t enough to convince him to part with the card.

Let’s be honest, it’s hard to put a price on a card that provided the third greatest moment of his life.

“My daughter being born, the day I got divorced and Thursday,” Tucker noted. “Those are the top three. I don’t think it’s sunk in yet. It’s amazing. It’s an awesome feeling.”

Less than 16 hours later, historically unlucky collector Rich Esposito experienced an awesome feeling of his own from the five packs of Contenders he purchased at Evolution Sports Marketing in Port Jefferson, N.Y.

Admittedly, Esposito is the person who “really never pulls anything.” That’s why Friday morning seemed to be just another one of those days. He bought four packs, opened them in his car and uncovered nothing but hitless frustration.

“I said ‘Ugh, I can’t leave without even a crummy auto,’ so I went back in and bought one more pack,” Esposito said. “I got in the car and started for home. Halfway there, I cracked and opened the pack. I didn’t  get an auto like I wanted. I got something so much better.”

“This is so much better,” Esposito said. “I was so shocked because I was actually thinking of pulling one of these on the way to the shop, but then thought I’d never get lucky enough for something like that. And when I saw it, I was like ‘no way!’ I’m so glad I went in and bought one more pack. I have been collecting since 1998 and have never pulled anything good. Ever.”

Guess he can’t say that anymore.