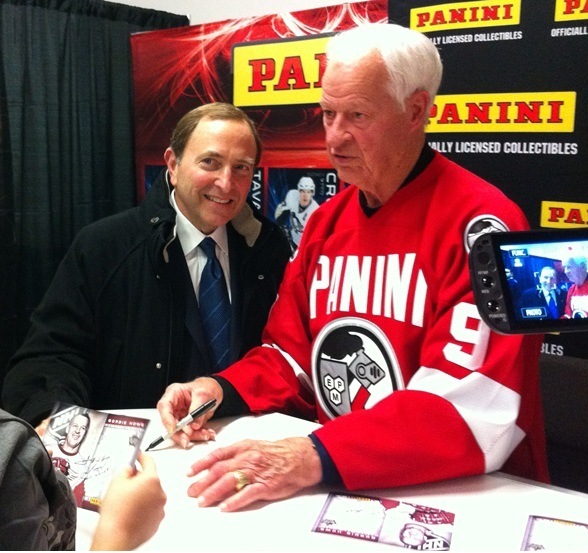 Indeed, Howe’s scheduled appearance inside the Panini America booth at NHL Fan Fair to celebrate his new multi-year trading agreement with the company was must-see entertainment for seemingly everyone in the building Friday, including NHL commissioner Gary Bettman.

Like just about everyone else inside the sprawling, multi-level Ottawa Convention Centre, Bettman simply couldn’t pass up the chance to spend time in the presence of Mr. Hockey’s greatness. And greatness he was.

Howe entered the Panini America booth to a throng of assembled media and a seemingly never-ending line of awestruck fans waiting to get his autograph, shake his hand or just simply to lay eyes on him. Panini America Vice President of Marketing Jason Howarth started the appearance by introducing Howe and making official the partnership that had been announced just hours earlier.

What followed was 90 minutes of blissful memories that will last hundreds of collectors and fans — including Bettman — the rest of their lives.

The following gallery provides a small peek into a most legendary afternoon. But before you get to the pictures, watch this quick video from Mr. Hockey himself.