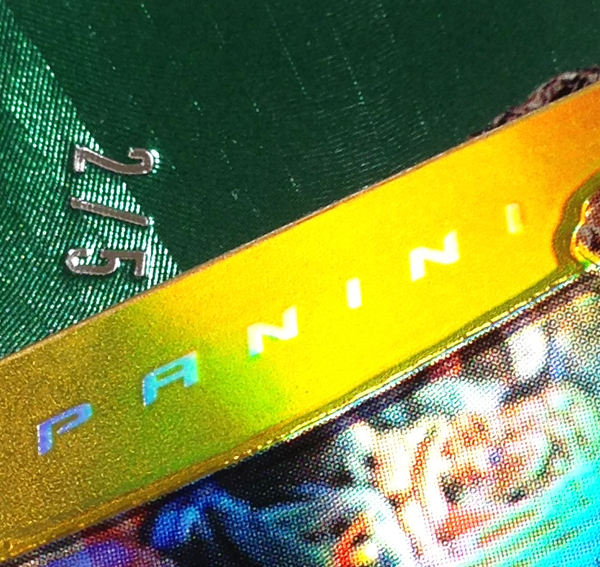 Green's the color of cash. Gold's the color of, well, gold. Monetarily speaking, both tints tend to illicit thoughts of bling . . . of bank . . . of big bucks. And in the case of two coveted new Panini America NBA parallel sets, those heavenly hues are making waves and wads of cash on the secondary market.

Green’s the color of cash. Gold’s the color of, well, gold. Monetarily speaking, both tints tend to illicit thoughts of bling . . . of bank . . . of big bucks. And in the case of two coveted new Panini America parallel sets, those heavenly hues are making waves and wads of cash on the secondary market.
There are no autographs on these particular cards; no pieces of memorabilia embedded in them. At play here instead is a cash-flush combination of rarity, printing wizardry, intrepid designs and eye-popping pigments that makes those selling the cards lots of green — and those who wish they were green with envy. They’re the Gold Prizm parallels in 2012-13 Prizm Basketball and the Totally Green parallels in 2012-13 Totally Certified Basketball.

“We’re excited about the interest collectors have in both the Totally Green parallels and the Gold Prizms,” said David Porter, Panini America’s NBA Brand Director. “We have worked hard to develop extra content and value outside of the autographs and memorabilia cards promised in our programs. Whether it’s scarcity or unique technologies, we’re always working hard to discover additional content for our products — and we really appreciate the excitement of collectors when they discover it.”
The numbered-to-five, new-year Totally Greens hit the market two weeks ago, signaling the welcome return of the wildly popular parallel set that ignited a feeding frenzy in 2010-11 Totally Certified Basketball. In the first few weeks since release, the 2012-13 versions have been chart-topping, secondary-market moneymakers.
The first Anthony Davis sold for $600. An Andre Drummond went for $300. Jeremy Lin, Steve Nash and Kevin Garnett all eclipsed the $150 barrier, and the likes of Iman Shumpert, Nicholas Batum and Paul George surpassed $100.
In addition, the first Kevin Durant and Kyrie Irving 2012-13 Totally Certified Totally Green parallels have surfaced on eBay and are sitting at $142.50 and $125.38, respectively, with still more than four days remaining. Stay tuned to these auctions as things could get crazy. Totally crazy.
(Of course, we could also mention Durant’s 2012-13 Totally Certified Totally Green prime memorabilia card that sold for more than $1,300, but that’s a story for another time.)
************************************************************************
To say that Panini America struck gold with last week’s release of 2012-13 Prizm Basketball might be something of an understatement. And nowhere is that product’s success more evident than in the numbered-to-10 Gold Prizms, which have collectors striking it rich all over the country.
The first Kobe Bryant Gold Prizm to hit the open market sold for $400. Four days later, the second one sold for $1,000. A Davis changed hands for $550 while Lin ($406), Shumpert ($210), Ricky Rubio ($200) and Scottie Pippen ($185) also registered pause-causing totals.
But the price of Gold is about to go up. Way up. A Gold Prizm version of LeBron James’ USA Basketball insert recently surfaced on eBay and, as of right now, is sitting pretty at $1,009.99 on the strength of five bids — and there’s still almost five days remaining in the auction. Meanwhile, one of James’ Finalists Gold Prizms already has surpassed the $130 mark with more than four days remaining.
“Parallels are tricky, especially when it comes to the basketball market,” said Keith Hower, Panini America’s NBA Brand Manager. “Totally Certified is the rare brand where parallels drive the product, and with the technology used in Prizm, there is a direct link to a successful parallel program. We played on these market paradigms and are happy to see it translate into extraordinary secondary market value.”
We’ll continue to monitor the activity on these cards in the coming weeks. But in the name of daydreaming part of your Wednesday away, here’s a gallery of some of the juiciest Totally Greens and Gold Prizms.