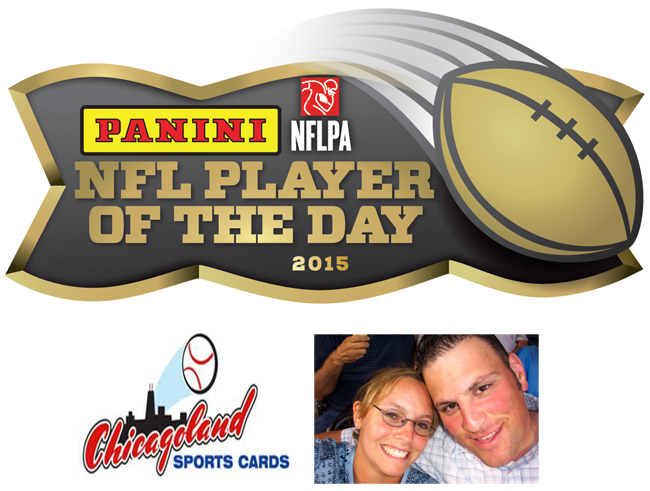 Rick Brodsky, a trading card collector from Wauconda, Ill., turned a pack of officially licensed Panini America NFL trading cards into the rare opportunity to spend a day with an NFL player. As the grand prize winner of the 2015 Panini NFL Player of the Day hobby shop promotion, Brodsky will spend the day with a Chicago Bears player in April.

Rick Brodsky, a trading card collector from Wauconda, Ill., turned a pack of officially licensed Panini America NFL trading cards into the rare opportunity to spend a day with an NFL player. As the grand prize winner of the 2015 Panini NFL Player of the Day hobby shop promotion, Brodsky will spend the day with a Chicago Bears player in April.

Brodsky will host a private party at his home for up to 25 friends and family members at which all of his guests will have an up-close and personal meeting with the NFL player. Afterward, the party will move to Brodsky’s favorite local hobby shop – Chicagoland Sports Cards — during which he will receive a $250 shopping spree courtesy of Panini America.  While at the shop, the entire community will join in as winners as the player will spend an hour signing free autographs and posing for photographs with up to 200 customers.

“Since the birth of my son, I haven’t been able to collect as much as in the past, but I hope one day when he is old enough we can collect together,” Brodsky said. “My dad and I had so much fun going to card shops and shows on weekends so I would love to pass this hobby on to my son. I can’t wait to share this experience with my friends, family and fellow collectors that I see every weekend at Chicagoland Sports Cards. Thanks to Marc and Les Goldsmith at Chicagoland for providing a friendly and trustworthy shop in this fun hobby.”

“The Panini NFL Player of the Day has been the hobby’s favorite promotion for more than a decade because it helps hobby shops sell more Panini NFL trading cards and rewards loyal collectors,” said Jason Howarth, Panini America Vice President of Marketing. “Connecting collectors to their favorite players and teams is what we do at Panini, so we’re excited to host this special day for Rick, his family, friends and all of the loyal customers of Chicagoland Sports Cards.”

Brodsky, 35 and a lifelong sports fan, collects the Bears, Cubs and former Penn State football players. He searches checklists of all new products to add to his collection and goes back to previous years to fill in missing cards. He was among more than 150,000 NFL card collectors who participated in the 2015 Panini NFL Player of the Day contest at more than 600 hobby shops this fall. He is among the thousands who earned prizes, but as the Grand Prize winner, he is the only one spending the day with an NFL player. His journey began just like thousands of other collectors, when he uncovered the Panini NFL Player of the Day in a pack of Panini America NFL cards. He was then randomly selected as Chicagoland Sports Cards’ grand prize winner and entered into the national sweepstakes with 600 other shop winners.

Stay tuned to The Knight’s Lance for continued coverage of the 2015 Panini NFL Player of the Day grand-prize event, including the reveal of this year’s NFL player.