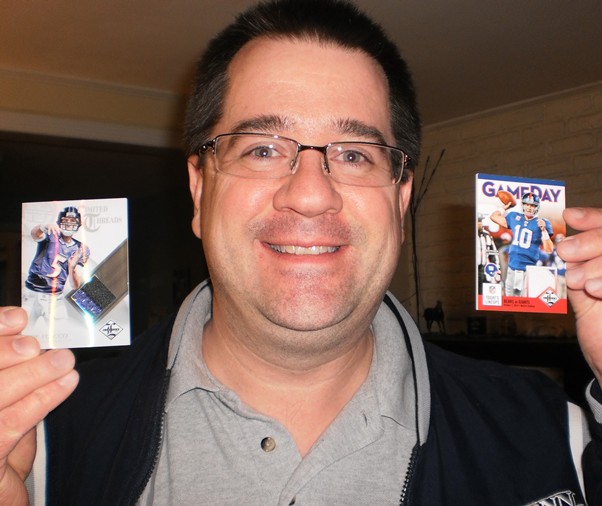 Most regular readers of The Knight's Lance know him simply as "Keith S," the mild-mannered Philadelphia sports fan and frequent deliverer of insightful comments. But to middle-school students at Tinicum School in Essington, Pa., he's known as "Mr. Saroka," the Penn State-educated science teacher with a passion for card collecting.

Most regular readers of The Knight’s Lance know him simply as “Keith S,” the mild-mannered Philadelphia sports fan and frequent deliverer of insightful comments. But to middle-school students at Tinicum School in Essington, Pa., he’s known as “Mr. Saroka,” the Penn State-educated science teacher with a passion for card collecting.

While we have no doubt that Saroka’s teachings on such things as chemistry, physics and astronomy are must-see parts of his educational arsenal, it’s his extra-curricular course on card collecting that we want to take.

“As part of the Positive Behavioral System at Tinicum School, once the middle-schoolers earn 1,000 ‘buc’ notes for positive behaviors (we are the ‘Buccaneers’), they’re rewarded with an activity afternoon,” Saroka says. “They spend this afternoon doing crafts, having extended gym time,  seeing holiday movies, etc. In my room, we have card collecting club.”

Saroka, who’s been teaching for 20 years and collecting for longer than that, conducted the most recent meeting of Tinicum’s Card Collecting Club just before the holiday break in December. The meeting began with Saroka sharing personal stories and treasures from his collection of Philadelphia Phillies cards from 1909 through 1978.

After that, Saroka schooled the 20 students in attendance on the finer points of Pack Wars, awarding to winners 50-card prizes lots filled with cards from 2012-13 Threads Basketball, 2012 Rookies & Stars Football, 2012 Elite Football, 2011-12 Elite Hockey and more.

“We finished up with the students getting cards of their favorite players and teams from retail packs of 2012 Absolute Football, and having the chance to trade cards and share stories of what they had in their own personal collection or perhaps what their parents had collected. Our assistant principal stopped in for some of the fun and was thrilled to get one of the 2012 Triple Play Baseball eye black cards, which he thought was very cool.

“The students had fun and were grateful to have received about 100 cards or more for free to take home.”

But perhaps more importantly, thanks to Saroka, the kids also took home positive memories and a passion for collecting that will serve this wonderful hobby of ours well into the future. Like Saroka, we can’t wait for his next Collecting Club meeting coming this spring.

Oh, and if you want to see Saroka in action busting packs with his kids inside the Panini America booth at the 2012 National Sports Collectors Convention, check out the 1:20 mark of this video.

Saroka was nice enough to provide some pictures of the big day, which you can check out in the gallery below. But before you get to those, here’s a little background on Saroka, the card-collecting science teacher:

When he started collecting: “I started in 1978, when my Uncle Ed would bring me about 10 packs of whatever was in season when he would come to visit, or have them there for me when we went to visit him. It was quite exciting for a 9-year old to look for that brown paper bag of card-collecting goodness each time I saw him. So, he more or less got me started collecting cards. Soon I found friends at school that were collecting cards and the rest, as they say, is history.

“Generally, while I do dabble and buy a box here and some packs there of just about anything, I mainly collect baseball cards (about 10 percent football, 10 percent hockey and a bit of basketball). I try to put regular sets together (usually leaving out the SPs). If a set catches my eye, I try to put it together.”

His favorite dealers: “George’s Baseball Cards in Levittown, Pa. I’ve been buying from him since 1982. He’s in my hometown so I still get to visit occasionally. Carl’s Cards in Havertown, Pa., is a great shop with great cards.”

His favorite hobby story: “I got to know a pistachio farmer in California who was collecting cards of All-Stars for his grandkids. I would ship him boxes of cards of the players he was looking for, and he would trade me his California pistachios and other nuts. We did this for a number of years back in the early 2000s.”

Collecting in college: “I graduated from Penn State in 1993 with a teaching degree and an earth science degree. There was a great card shop up there the years I was there. I don’t remember the name, but it isn’t there now. I would often bring back cards to trade with them when I went home and that’s basically how I was able to keep collecting in the late 1980s and early 1990s as a broke college student.”

Teaching: “I’ve been teaching science for 20 years at Tinicum school in Essington, Pa. We are a stone’s throw from the Philadelphia International Airport and about 10 minutes from all of the Philly sports stadiums. I have always had my ‘Philly wall’ in the classroom with current players from the Phillies, Eagles, Flyers and 76ers. I also have my ‘scientist/inventor card wall,’ as products like Panini America’s Americana have started including scientists, astronauts and inventors.”