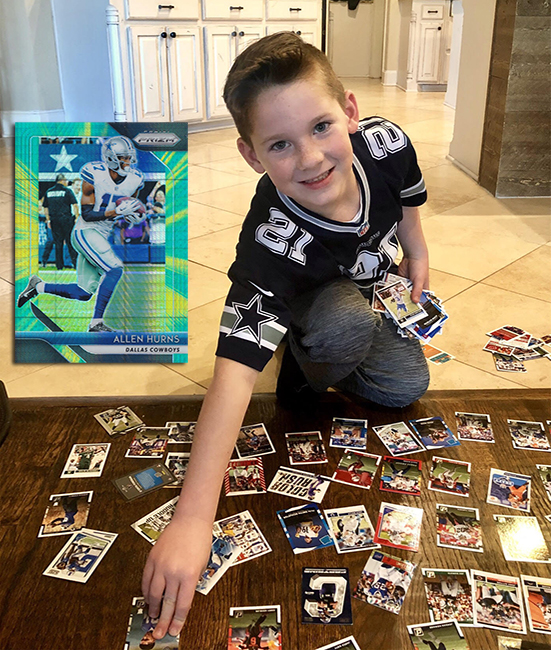 Luke McSwain came back to school from the holidays with a story for the ages.

Luke McSwain came back to school from the holidays with a story for the ages.

The 8-year-old, who has big passion for football and even bigger passion for football cards, chatted up with his classmates at Castle Hills Elementary in Lewisville, Texas, about how the Dallas Cowboys scored a big win over the Seattle Seahawks in the wild-card round of the NFL Playoffs.

But Luke was more excited about something else from the game, beaming from the new bond he had formed with Cowboys wide receiver Allen Hurns. Hurns severely injured his ankle during the first quarter of the game and was carted off the field on a stretcher. The injury hit Luke so hard that he couldn’t sleep that night. Instead, he put pencil to paper.

Luke wrote a heartfelt letter to Hurns and drew a picture of the wideout with the caption “Number 1 Wide Receiver.” The letter made waves on social media Sunday after NFL Network reporter Jane Slater tweeted the story.

“Dear Allen Hurns #17,
I saw the Cowboys-Seahawks game last night. I saw you get hurt. I hope you are okay. Don’t worry you have the best [doctors] in the world. I prayed 4 times for you. You will get way better shortly.”

My friend’s son Luke was incredibly distraught after seeing @A1hurns injury last night. She said he couldn’t sleep and wrote him this letter. 😢 pic.twitter.com/KJTdA0wbNF

As a result of his heart-touching gesture, Luke was able to FaceTime with Hurns once the receiver was out of surgery, and he even dug into his football card stash to show off some cards, especially the ones of Hurns himself.

Allen’s reassuring Luke that he’s ok. @SlaterNFL God bless you and Luke. You not only put a smile on @A1hurns face but my face as well. Proverbs 22:6 Train up a child in the way he should go; even when he is old he will not depart from it. Mom great job🙏🏽💪🏽💙1️⃣7️⃣ pic.twitter.com/tblhx0btvB

“We talked for like five minutes, and he was excited and happy to talk to me,” the youngster said.  “I was really happy to get a chance to talk to him. He told me he has a cast on and he was watching the Bears-Eagles game.”

“I really like opening the packs and going through all the cards and seeing the players’ pictures,” Luke said. “I love the cards that are shiny. I really like when you put them in the light and flip then and you can see flashes. They look so cool.

“I really like Pat Mahomes and Keke Coutee,” he said. “I like Keke because he went to Texas Tech, and he has a really cool name.”

Luke also possesses autograph cards of Derrick Henry, Elliott and Brown, saying, “I keep those in special places because they are special.”

All those cards don’t create clutter around the McSwain household, his mom said.

“He’s been collecting since he was in kindergarten,” said his mother, Kim McSwain. “He was young. He went from Hot Wheels to sports.”

The best part of collecting cards for Luke? Trading with his friends — especially when he can get the upper hand.

“My latest trade was Jerome Bettis for Cam Newton. I couldn’t trick him because he knows what he’s doing.”

Maybe one day Luke will have an official trading card of his own that other kids could wheel and deal.

Editor’s Note: We, too, were moved by Luke’s heartwarming gesture. So we decided to send him a little Panini America care package that includes some new NFL cards for his collection – as well as the first Luke McSwain Rookie Card. 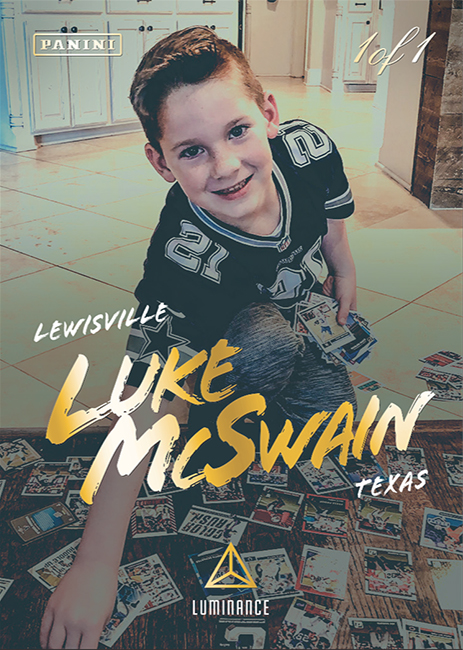 Ram Luthra is the Copy Supervisor for Panini America.