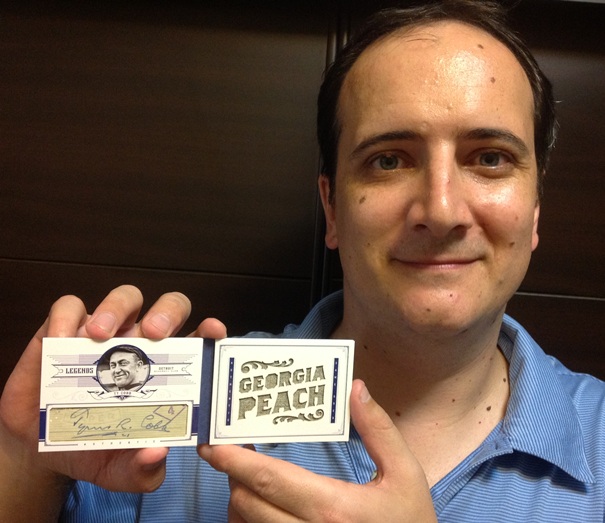 I received a most spectacular email from Taiwan-based collector Andre Pretorius early Thursday morning informing me of a truly monster pull made on his behalf by Chris Justice of Cards Infinity. The shocking pull from 2012 National Treasures Baseball was caught on video and sent shock waves surging throughout the card-collecting globe.

I received a most spectacular email from Taiwan-based collector Andre Pretorius early Thursday morning informing me of a truly monster pull made on his behalf by Chris Justice of Cards Infinity. The shocking pull from 2012 National Treasures Baseball was caught on video and sent shock waves surging throughout the card-collecting globe.

What follows is the meat of Pretorius’ email, and the must-see video, that work in concert to describe in great detail how he came to own one of the greatest single cards in the entire 2012 National Treasures Baseball release; a card that I’ll forever remember as “Andre’s giant.”

“Good day, Mr. Hackler. I’ve received a very special card today. This might be a bit of a storied email, but please bear with me. In early January, I read the first preview of 2012 National Treasures Baseball and since  then, I’ve been saving up a bit to buy a few boxes of the product when it came out.

“About a week before release, I contacted Chris Justice of the Hobby Box and Cards Infinity. I usually buy my boxes and cases from him and and I asked him to keep out a box for me when the product arrives. I told him I’d like it shipped sealed. On February 27, I read about the first break of 2012 National Treasures Baseball in Hong Kong. Shortly after that, I saw your case break gallery on the Panini America blog and I was hooked! Beautiful, beautiful cards. So, I contacted Chris again and asked him to add another box. I just couldn’t wait to see more of the cards! I told him to open the second box on video and to send the other one sealed. I asked him to give me two boxes from the same case as I’d like a chance at one of the big case hits.

“Since I live in Taiwan, I only saw the break the next morning. I got up, took my wife’s iPad, sat back and watched my break. I nearly had a heart attack! I was running around the house with my two little girls in tow (who trying to understand why Daddy is freaking out!).

“The funny thing is, just last week I was looking at some of the Ty Cobb cuts on eBay as I was really interested in purchasing one. But most of the ones on cards were cut so badly that they made the cards look really messy and unfinished. Then I got this one and it was PERFECT! Needless to say, I was super, super, super delighted.

“So, I just wanted to thank you guys for making such an unbelievable product. Since I only collect baseball, I haven’t bought that many Panini America products, but I truly love the quality of this one. Since then I’ve ordered another case from Chris and I’m looking forward to busting it. This is by far my best pull and a card I won’t sell as it’s just too awesome.

“I just wanted to share all that. Thanks for taking the time to read about it.”

What a fantastic story, Andre. Thanks for sharing your tale with us and congratulations.

17 Replies to “International Treasures: Cards Infinity Hits Pull of a Lifetime for Collector in Taiwan”