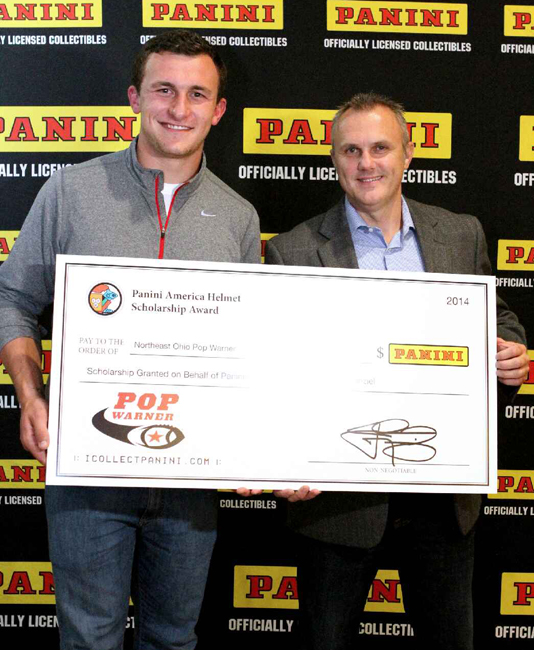 Tomorrow Kylian Mbappe and France square up against Poland in the Round of 16!! Who's going to win this game? Drop your pick in the comments!#whodoyoucollect #FIFAWorldCup #WorldCup2022 #worldcupqatar2022 #worldcup #Qatar2022 ... See MoreSee Less

CLEVELAND — Cleveland Browns rookie quarterback Johnny Manziel made a surprise appearance during Panini America’s third annual National VIP Party on Saturday night inside FirstEnergy Stadium. But Manziel didn’t attend the gala just to rub elbows with special guests such as Joe Namath, Kyrie Irving or Jose Canseco, or to revel in the night’s festivities with roughly 200 attendees. Instead, he dropped by to announce that he, along with Panini America, will be providing a helmet equipment grant to Pop Warner’s Northeast Ohio team, the Bedford Heights Saints.

“Ever since I was a little kid playing Pop Warner myself, this has always been one of my favorite times of the year because it means it’s time to get ready for the season,” Manziel said. “I feel that same sense of excitement today and can’t wait to hit the field with the Browns. But before then, I wanted to join with Panini to help kick the season off on the right foot with new helmets for a very deserving program in Cleveland — for kids who have the same dream that I had when I was their age.”

Manziel – who has an exclusive autograph memorabilia deal with Panini Authentic, the memorabilia division of Panini America – took a brief break during a team off day from NFL training camp to present a sizable helmet grant donation to Pop Warner’s Bedford Heights Saints on behalf of Panini America, the exclusive trading card and sticker manufacturer of Pop Warner and the Pro Football Hall of Fame.

“We were excited to hear the news that Johnny Manziel and Panini America wanted to do something special for a Pop Warner program in Johnny’s new home town,” said Jon Butler, Executive Director of Pop Warner Little Scholars. “It means a lot to know that there are NFL players out there like Johnny who are committed to doing what they can to support Pop Warner players whether they are just playing as kids or make it to the pinnacle of our sport, the NFL.”

Manziel’s brief appearance at the Panini VIP Party, held annually at the site of the National Sports Collectors Convention, was quite a sight for surprised party attendees who had no idea that Johnny Football himself would be dropping by to conduct a brief bit of business.

“This donation was something that meant a lot to Johnny and we’re honored to be able to partner with him on it and to find a brief window of time for him to make the presentation in person,” said Jason Howarth, Panini America Vice President of Marketing. “Our exclusive relationships with both Johnny and Pop Warner are of huge importance to us. Bringing them together in such a meaningful way ensures that a program here in Cleveland has new equipment for the upcoming season.”

Earlier in the week, officials from NFL Players, Inc. announced that they had agreed to a long-term exclusive trading card and sticker agreement with Panini America beginning with the 2016 season.