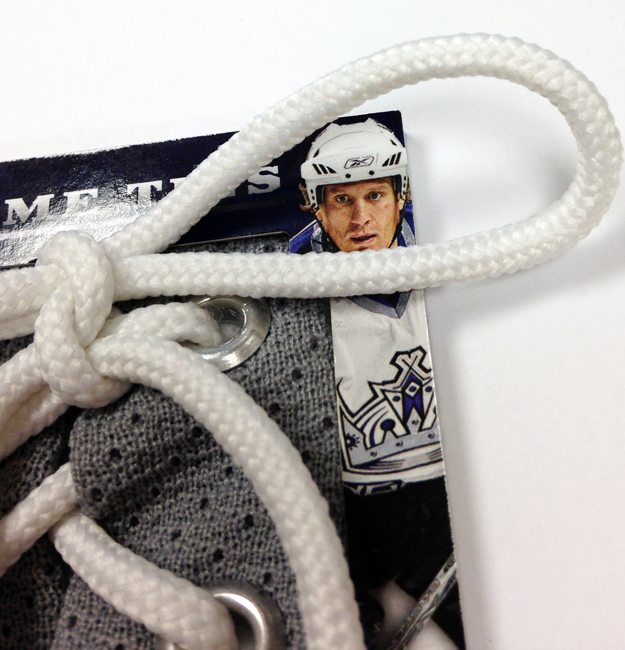 They hail from the Prime Ties insert, the spectacular encore to last season’s stunning innovation that popular Yahoo Sports blog Puck Daddy called “among the coolest hockey cards ever.” One look at these one-of-a-kind masterpieces and you’ll no doubt agree.

But before we provide the world-premiere gallery showcasing every card in the 2012-13 Prime Hockey Prime Ties insert, it’s probably worth revisiting what I wrote about last year’s debut of the revolutionary memorabilia cards featuring game- and event-worn jersey lace-ups, After all, the same sentiment still applies almost one year later:

“I have a confession to make: When I first laid eyes on the overwhelmingly unique Prime Ties insert cards from the new 2011-12 Prime Hockey, I was speechless, my tongue tied and twisted in knots like the laces I was looking at. Words alone can’t do these gems justice. Simply, these are some of the coolest hockey cards I’ve ever seen. Obviously, these ties to die for won’t fit in a Prime box; but they are ready to go and will be issued via redemption cards as soon as they’re entered into the Panini America redemption system.

“The truth of the matter is that I would say that about these cards even if I didn’t work here. But luckily, I do. And as a result, I was able to secure images of every card in the set — before they started making their way out to collectors earlier this week — for the following Panini America Drool Gallery.”

Fast forward 11-plus months and here we are once again, anxious to get every last card from Prime Ties’ fabulous 2012-13 encore into the waiting hands of collectors across North America. Until we do, however, here’s a first look at what are, without question, among the coolest cards we’ve ever seen. Enjoy.