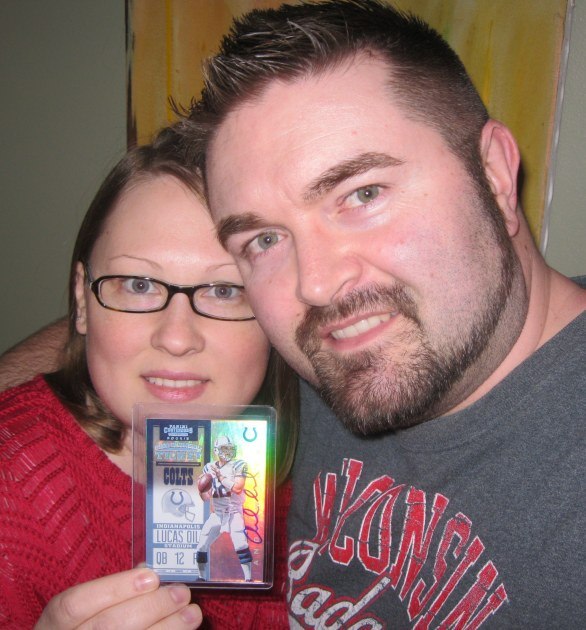 Wisconsin collector Derek Reiter was running an errand Saturday afternoon when he made a quick pitstop at Green Bay's Packer Cit Antiques to scratch a pack-busting itch. He picked up, among other things, four packs of 2012 Contenders Football and hit the road without opening them in order to make his previously scheduled haircut appointment.

UPDATE: Earlier this week, we brought you the story of Derek and Keeley Reiter discovering a rare autographed trading card of Andrew Luck in Panini America’s 2012 Contenders Football product. In the three days since the original story, eBay bidding on that card has soared from $12,000 to more than $32,000 — with still more than five days remaining.

Said Reiter: “I can’t believe how high this auction is going. It’s crazy! I put the card in a safety deposit box for the time being. I didn’t want it in the house anymore. It’s a little nerve racking! This could really help my family.”

The original story appears below:

Wisconsin collector Derek Reiter was running an errand Saturday afternoon when he made a quick pitstop at Green Bay’s Packer City Antiques to scratch a pack-busting itch. He picked up, among other things, four packs of 2012 Contenders Football and hit the road without opening them in order to make his previously scheduled haircut appointment.

The only problem? Reiter had left his checkbook back at the house where wife Keeley was watching the couple’s children. No checkbook meant no haircut, so Reiter returned home to retrieve it — and to let Keeley in on his impromptu product purchase.

“I was busted by my wife,” Reiter said. “I told her we could open the packs together when I got home. Honestly, I didn’t even think about the packs until I got back. My wife decided that she was going to open them all, so we sat down on the couch together while the kids were playing in the other room.”

Derek was fine with Keeley opening the packs — as she had done many times before — so long as she didn’t tip her hand as to the contents of those packs. Poker face intact, she opened the first pack. Then the second. Then the third. But on the fourth and final pack, Reiter’s rather ho-hum Saturday afternoon went from hair-razing to hair-raising.

“Like a storybook, she opened it up and the only thing she said, with a smile, was, ‘I like this pack . . . I really like this pack,'” Reiter recalled. “I had no idea what she pulled but I figured it was a rookie autograph. She handed the stack to me to look through and when I saw it, my stomach dropped.”

Near the bottom of that stack, staring right back at Reiter, was none other than the autographed Andrew Luck Championship Ticket, a true one-of-a-kind card and one of the two or three most sought after and expensive cards in the entire 2012 Contenders Product. Not bad for a $28, four-pack investment.

Reiter initially was beside-himself giddy because he thought he’d pulled the base Luck Rookie Ticket autograph. But the card’s rainbow foil indicated this was something quite different. So Reiter flipped the card over. Then he just flipped.

Crazier still is what the card has been bid up to on eBay in less than two days on the market. Try $12,100 on the strength of 47 bids — with still more than eight days remaining.

Reiter, a lifelong collector, wrestled ever so briefly with whether to sell the card or keep it, but ultimately opted to part with it.

“I haven’t had much luck (no pun intended) pulling anything good in the past and this blew my mind,” Reiter said. “I had read about this kind of once-in-a-lifetime pull many times but never imagined anything like this happening to me. I’m not sure what the card is valued at. I just know it’s worth a lot more to a true Colts fan. I really wanted to keep it but I thought to myself, ‘this is bigger than me.’ Someone will enjoy it way more than me.”

Stay tuned to The Knight’s Lance for updates to this story.