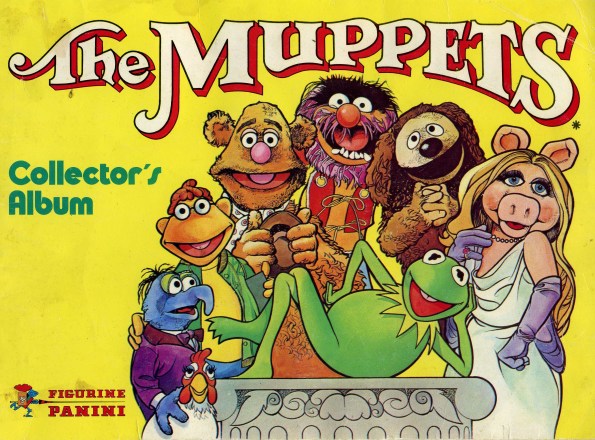 Had he still been with us, Jim Henson would’ve turned 75 today. Although he passed away in 1990, Henson’s legacy lives on. His puppet creations have now touched several generations. More than 40 years after it began, Sesame Street is still on the air, broadcasting to all corners of the globe.

Editor’s Note: Ryan Cracknell covers sports and entertainment collectibles for The Cardboard Connection and on his personal blog, Trader Cracks. In this special contribution to The Knight’s Lance, Cracknell honors the memory of Muppets creator Jim Henson by looking back at Panini’s enchanting 1979 Muppets Sticker & Album Collection.

Had he still been with us, Jim Henson would’ve turned 75 yesterday. Although he passed away in 1990, Henson’s legacy lives on. His puppet creations have now touched several generations. More than 40 years after it began, “Sesame Street” is still on the air, broadcasting to all corners of the globe.

Dig through the cheap DVD bin at Walmart and you’ll likely find a nostalgic trip in the form of “Fraggle Rock.” “The Dark Crystal” and “Labyrinth” have developed cult followings over the years.

But whenever you talk about Henson, the Muppets are bound to come up. Lasting five seasons and 120 episodes, “The Muppet Show” was one of the world’s most popular series. It was like “Saturday Night Live” for families, with puppets putting on a vaudeville-style variety show. Each episode also had a special celebrity guest to help with the numbers. Movie stars like Bob Hope, Sylvester Stallone and Steve Martin, popular singers from the day like Elton John, Kenny Rogers and Linda Ronstandt, and performing artists such as Mummenschanz and Rudolf Nureyev all performed on the show at some point.

Like a lot of popular programs, “The Muppet Show” had a ton of merchandise that spun off from it. One such piece was a Panini sticker album simply titled “The Muppets.” Released in 1979, the collection included 256 stickers and a 32-page album. Flipping through from front to back, it reads like an episode of the show, filled with gags, skits and an ongoing story that threads throughout.

(Enjoy the comprehensive gallery of the sticker album and its colorful pages below.)

Today, much of the Muppet merchandise focuses mainly on the big characters like Kermit, Fozzie, Animal and Miss Piggy. Not here. The album gets instant love for simply combining Muppets and stickers. But what makes it even better is the fact that it covers so many of the Muppets, big and small, popular and obscure. It probably helped that when the set was put out, you wouldn’t get the stink-eye from someone if you started talking about Marvin Suggs or Sweetums. Throughout the album, there’s  also a ton of original artwork that further adds to the fun.

The stickers start with a massive eight-sticker puzzle that recreates the classic “Muppet Show” logo curtain that opens every episode. From there, the next few pages offer an introduction to some of the more important characters, including Gonzo, Scooter, Statler and Waldorf. Hands up if you know who Thog is.

For some reason, though, a couple of my favorites are missing: Muppet Newsflash, Dr. Bunsen Honeydew and his sidekick Beaker.

Acting like a musical interlude, The Electric Mayhem get three pages to themselves. This is followed by “At the Dance,” which was an ongoing skit that was often an excuse to work in secondary characters and run some one-liners and sight gags on the show. As the album progresses, there’s pages for more standalone skits and classic ones like the Swedish Chef, Pigs in Space and Veterinarian’s Hospital.

The album closes with a couple of pages that appear to be from “The Muppet Movie” in a montage dedicated to Muppet music.

Finally, the back page lets collectors know how they can order missing stickers to finish their sets. The cost back then: 10 cents each and a whopping 30 cents to ship. The album itself boasts a cover price of 25 cents.

I’ve got a few sets of Muppet-themed cards but none of them come close to the scope of Panini’s sticker album. Combining classic characters, obscure monsters, memorable skits and a bunch of original art, it’s a thorough tribute to what made “The Muppet Show” a classic for a generation of television viewers.

With a much-hyped new movie on the way, here’s hoping that a new generation “gets” the loving creative genius that Jim Henson continues to share with the world.

7 Replies to “Magical Memories: Honoring Jim Henson, the Muppets and their Sticky Panini Past”