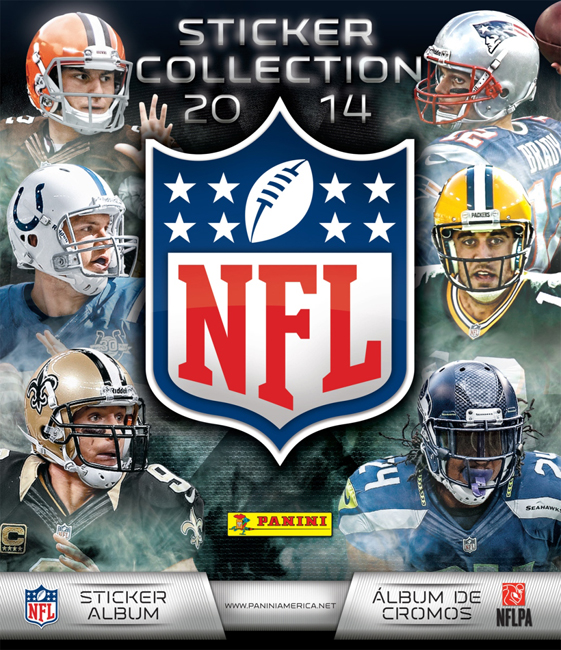 Manziel’s appearance marks the first time in the five-year history of the Official NFL Sticker & Album Collection that a rookie has graced the cover.

“Putting Johnny Manziel on this year’s cover was a no-brainer; he’s already one of the most popular and collectible players in the NFL – and he has been ever since he crossed the stage on draft night,” said Jason Howarth, Panini America Vice President of Marketing. “For many fans and collectors across the country, the NFL Sticker Collection symbolizes the start of the new season and represents the genuine excitement of collecting your favorite players and completing your album. The players on this year’s cover embody that excitement.”

Last year, Panini America produced its first all-quarterback cover; five of those players (Brady, Luck, Colin Kaepernick, Peyton Manning and Russell Wilson) advanced to the playoffs in 2013, with Wilson and Manning meeting in the Super Bowl. Brady and Rodgers lead all players with three cover appearances each in the last five years; Manning, Brees, Luck and Adrian Peterson are next with two cover appearances apiece.

“Every year since entering the U.S. market, Panini America’s Official NFL Sticker & Album Collection has grown in popularity and continues to entrench itself as a viable, season-long  family pursuit,” said Panini America CEO Mark Warsop. “It’s a perfect complement to our NFL trading card releases and we expect the 2014 edition to be our most successful yet.”

2014 NFL Sticker Collection packets include seven stickers and retail for $1, while the 72-page album will retail for $2. The Official NFL Sticker & Album Collection is available at retailers nationwide including Target, Walmart, Michaels, Learning Express, AC Moore, Shopko, K-mart and Dollar Tree. The collection also is available on the Panini America Online store.

Stay tuned to The Knight’s Lance for continued coverage of the Official 2014 NFL Sticker Collection and the accompanying mobile tour. Below, please find a gallery detailing five years of Official NFL Sticker Albums.