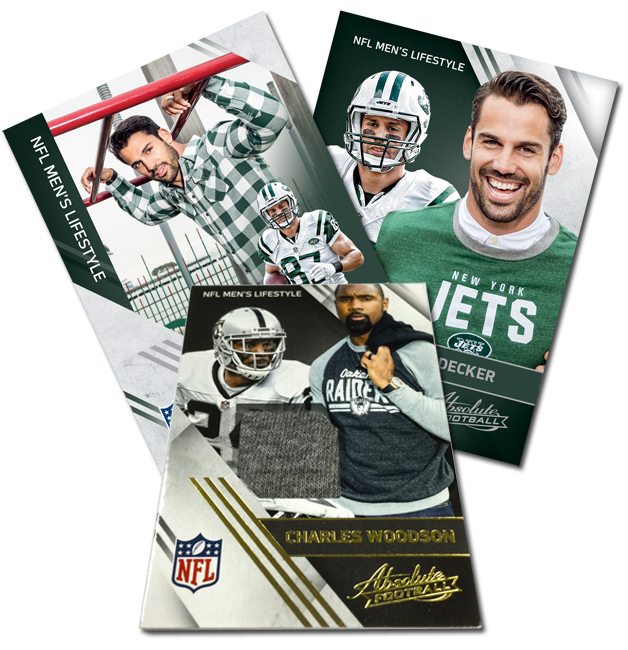 There's an unannounced -- and quite fashionable -- surprise in store for fans and collectors who tomorrow will get the chance to start cracking into Panini America's 2016 Absolute Football product. Thanks to a unique partnership between Panini America and the NFL, superstars Eric Decker and Charles Woodson will showcase a more sartorial side of things on 13 special memorabilia cards appearing in both hobby and retail configurations.

There’s an unexpected — and fashionable — surprise in store for fans and collectors inside Panini America’s new 2016 Absolute Football cards. Thanks to a unique relationship between the NFL and Panini America, NFL stars Eric Decker and Charles Woodson will showcase their fashion persona on 13 special Men’s Lifestyle memorabilia cards appearing in both hobby and retail versions of the product.
Each card features a swatch of player-worn clothing from the players’ NFL Men’s Lifestyle photoshoot and are bonus hits inside 2016 Absolute Football. The cards are quite rare on the hobby side, falling at a rate of about one every two cases.

“The objective of the NFL’s Men’s Lifestyle campaign is to strengthen and grow our relationship with the League’s male fan base, and continue to coach them on how to style NFL apparel for all occasions, said Bernie Gutierrez of NFL Consumer Products. “This campaign provides our athlete ambassadors the opportunity to be viewed beyond football players to fashion influencers.”
Woodson unveiled his cards yesterday on Facebook. Decker got the first look at his on Twitter earlier today. The NFL also released a cool “Making Of” video on social media.
Campaign ambassadors Decker, Woodson and Von Miller are the first NFL players to have their own Fashion Cards. The fashion products featured on their cards can be found on NFLShop.com/lifestyle.
Miller’s cards will be randomly inserted as bonus hits into an upcoming Panini America NFL release.