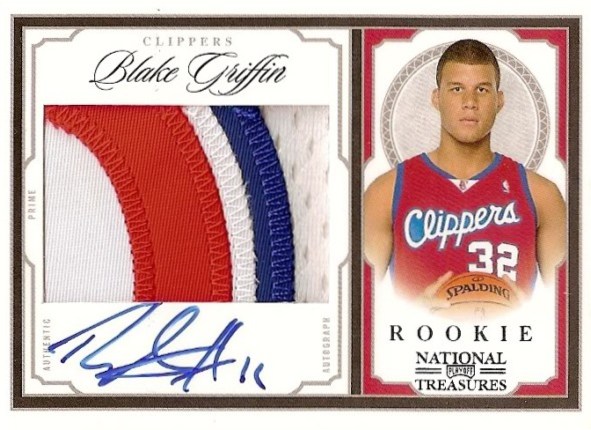 I spent 45 mesmerizing minutes last night watching the NBA.com highlight reel of Blake Griffin's 10 greatest slam dunks. The video, it should be noted, was less than four minutes in length. That means I watched it about 10 times. Seriously.

I spent 45 mesmerizing minutes last night watching the NBA.com highlight reel of Blake Griffin‘s 10 greatest slam dunks. The video, it should be noted, was less than four minutes in length. That means I watched it about 11 times. Seriously.

For what it’s worth, basketball card collectors can’t keep their eyes off of his exploits, either — nor their hands off of his basketball cards. Griffin’s best Rookie Card, 2009-10 Playoff National Treasures #201 — the drop-dead gorgeous one limited to just 99 copies and boasting the wunderkind’s bold-blue John Hancock and embedded with a prime piece of worn jersey — is currently valued by Beckett Media at $1,200.

Of course, that’s its value today. Tomorrow could very well be another story. After all, copies of that card popping up on the secondary market recently are selling for as much as $4,900 in some cases. And current asking prices for that card, or variations of it, have reached as high as $14,999.

In other words, to quote Panini America Basketball Brand Manager Mike Payne, “We now have a new king card in the basketball trading card industry.”

For the record, that same card was valued at $400 by Beckett Media in August. It vaulted to $600 in October, $800 in November and to $1,200 just recently. Tomorrow, it’s almost certain to ascend again.

“That card almost seems to be jumping in value daily,” notes Rob Springs, the Senior Pricing Analyst for Beckett Basketball. “We have seen some quality movement from several players since the start of the season, like Derrick Rose, Kevin Durant, Russell Westbrook, Kevin Love — but none quite as hot as Blake Griffin.

“Anything of his from last year and his handful of cards from this year are absolutely scorching hot and show no signs of slowing down as he seems to get better every night. And, with All-Star Game activities and a potential playoff run coming up soon, that could just add fuel to the fire.”

It’s performances like the one Griffin enjoyed last Sunday against Indiana, when he scored a career-high 47 points (on 19-of-24 shooting) and grabbed 14 rebounds in a 114-107 Clippers victory, that will transform the fire into a full-blown inferno.

At 6-10 and 251 pounds, Griffin is a physical freak who presents a mismatch for, well, everyone. He enters tonight’s game against Minnesota carrying averages of 22.5 points, 12.8 rebounds and 3.4 assists per game. He’s carrying the entire Clippers franchise, too. The team has won seven of its last 10 games, with the resplendent rookie scoring 28 or more points five times during that span.

Collectors have been waiting almost a decade for basketball’s next big thing. In the case of Griffin, the No. 1 overall pick in the 2009 NBA Draft who missed all of last season with a knee injury, they had to wait an extra year.

For many in the trading card industry, an entire year left to wonder what would become of Griffin’s best Rookie Cards proved to be quite harrowing. Not to worry, he clearly was worth it.

“The best example of a player that came out with high hopes, then died down for a bit due to either inactivity or injury, and then re-charged the full complement of products from a prior rookie-class year is Kobe Bryant,” Springs notes. “When he finally started to shine and show his true potential a few years after he was drafted, it ignited boxes and packs for the entire 1996-97 year.

“It’s lofty company, I know, but Griffin is really moving a bunch of 2009-10 product — from base-brand Panini all the way to Playoff National Treasures.”

By the way, after watching that 45-minute Griffin dunk montage last night, I was moved to play as him for a few games of EA Sports NBA Jam on my PS3. Before long, though, I was back watching Griffin’s NBA.com highlights.

When it comes to Griffin, not even one of the most entertaining videogame franchises ever created is a match for the real thing. Now, if I could just get my hands on one of his 2009-10 Playoff National Treasures Rookie Cards . . .

Check out Panini America’s Scott Prusha as he conducts the first interview Blake Griffin did in a Clippers uniform: