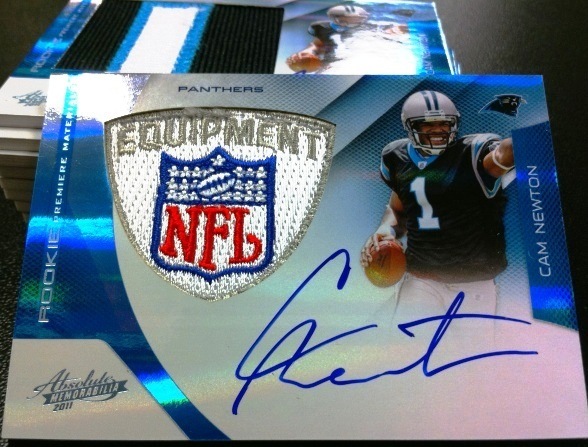 Make no mistake about it: Carolina Panthers superstar quarterback Cam Newton is enjoying one of the greatest starts to a career in NFL history.

Make no mistake about it: Carolina Panthers superstar quarterback Cam Newton is enjoying one of the greatest starts to a career in NFL history.

Through his first four games, Newton has passed for almost 1,400 yards and five touchdowns, rushed for 133 yards and four more scores and he’s been a finalist for Pepsi NFL Rookie of the Week honors every week. But football card collectors will likely find Newton’s performance on Wednesday to be his most impressive feat yet.

That’s when he returned to Panini America headquarters what no doubt will be some of the most coveted Rookie Cards of the 2011 season. The awe-inspiring shipment included Newton’s on-card handiwork for upcoming Panini America NFL trading card products 2011 Absolute Memorabilia, 2011 Crown Royale, 2011 Certified and 2011 Gold Standard.

His Absolute Memorabilia gems were rushed to the Panini America printing facility within minutes of arrival for inclusion in that product, which is packing out as we speak. We’ve had the chance to spend a little more quality time with the others. Now, it’s your turn . . .