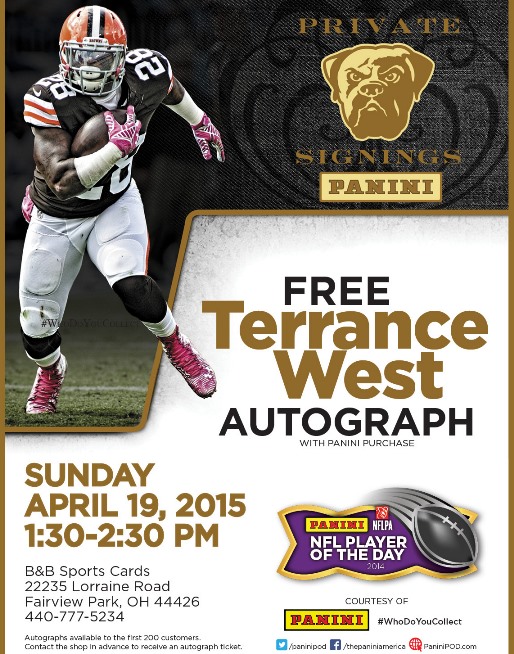 You wanna see some ice? The “Prizm” Question Mids are very icy.

It's World Cup stickers collection time!!! Thank you @PaniniAmerica for the love and appreciation!!! Who wants to trade?!?! #Panini #whodoyoucollect

Tom Pavich’s collecting story is like many others. As a youngster he was a rabid collector, but as time passed and life evolved -- including a career, marriage and the birth of his first child -- Pavich was forced to put collecting on hold. Although he still enjoyed his collectibles, the time and money he had to devote to his hobby were limited.

Tom Pavich’s collecting story is like many others. As a youngster he was a rabid collector, but as time passed and life evolved — including a career, marriage and the birth of his first child — Pavich was forced to put collecting on hold. Although he still enjoyed his collectibles, the time and money he had to devote to his hobby were limited.

But Pavich’s collecting passion was reignited last summer when he discovered that the National Sports Collectors Convention was returning to Cleveland.

“My dad and nephew joined me to check it out,” Pavich recalls. “I was curious to see what some of my stuff was worth and also to see what had changed in the memorabilia world while I was away.”

After walking the show floor for a few hours, Pavich realized how much he missed his hobby. So after a great day at the National, he says it was time to get back in the game. And as luck would have it, one of the best sports collectibles shops in the area, B&B Sports Cards, was just a few miles from his home in Fairview Park, Ohio.

In addition to adding some great pulls to his collection, Pavich was also a winner in the shop’s 2014 Panini NFL Player of the Day hobby shop promotion. He won a few cool prizes, including Panini NFL POD promo packs, and an exclusive Panini America NFL POD autographed card. He was entered along with more than 600 other store winners from across the U.S. into the national sweepstakes for the chance to win a Panini shopping spree at B&B Sports Cards and the chance to spend a day” with an NFL player.

Pavich’s decision to get back into the hobby was rewarded again when his name was randomly selected from the more than 600 national sweepstakes winners as the 2014 Panini NFL Player of the Day Grand Prize winner. As a result, Pavich will spend tomorrow with Cleveland Browns running back Terrance West. West will attend a private party for up to 25 of Pavich’s friends and family members at Pavich’s house. West will share stories of his breakthrough rookie season, toss around a football on the lawn, sign autographs and pose for photos with all of the party guests.

Afterward, the party will travel by limo to B&B Sports Cards, a Panini Roundtable store located at 22235 Lorraine Road, Fairview Park, Ohio, for Pavich’s $250 Panini shopping spree. While they’re at the shop, the entire community will join in as winners as the Browns’ running back will spend an hour signing free autographs and posing for photos with up to 200 customers.

“To be selected as the winner from so many collectors and getting the chance to have this unique experience is thrilling,” Pavich says. “It’s especially gratifying to be able to share it with my friends, family and fellow collectors at B&B Sports Cards.”

“The Panini NFL Player of the Day has been the hobby’s favorite promotion for more than a decade because it helps hobby shops sell more Panini NFL trading cards and rewards loyal collectors,” said Jason Howarth, Panini America’s Vice President of Marketing. “Connecting collectors to their favorite players and teams is what we do at Panini, so we’re excited to host this special day for Tom, his family, friends and all of the loyal customers of B&B Sports Cards.”

Be sure to follow the Panini America and Panini Player of the Day Twitter accounts tomorrow for live coverage from the event.

“I have hosted the Panini NFL Player of the Day promotion at my shop for more than 10 years because it’s easy to run, fun and rewarding for my customers,” says Bob Prunty, the owner of B&B Sports Cards. “Although we’ve awarded thousands of prizes over the years, it’s exciting to finally be able to share the excitement of the grand prize with all of our customers.”

Pavich was among more than 150,000 NFL card collectors who participated in the 2014 Panini NFL Player of the Day contest at more than 750 hobby shops this fall. He is among the thousands who earned prizes.

West, a third-round draft choice out of Towson University, led the Browns with 673 rushing yards this season, good for fourth among all NFL rookies.