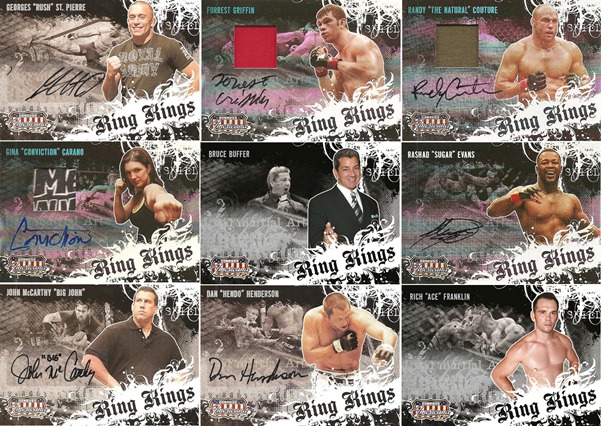 Just some of the Prizm pageantry in @paniniamerica

A statement from @paniniamerica regarding today’

Just posted to the blog: The complete checklist an

Check out the blog for a detailed first look at @p

Looking for a way to take your @EURO2020 fandom to the next level? Stop this video on the QR code to score a special offer on the official Panini Digital Sticker Album.

Congratulations to @hornets young star @MELOD1P, your 2020-21 @NBA Rookie of the Year.

Want to take your fandom for UEFA EURO 2020 to the next level? Stop this video on the QR code to score a special offer on the official Panini Digital Sticker Album. #whodoyoucollect #PaniniStickerAlbum #EURO2020panini.link/euro2020-fb ... See MoreSee Less

Every few Saturday nights I retire to an undisclosed location to watch the fastest-growing sport in the world: Mixed-martial arts. As MMA soars into the mainstream with network TV contracts, advertising deals for some of its biggest stars and steadily increasing press coverage, I hearken back to the days when MMA was nothing more than a hodgepodge of Neanderthals loaded in a cage somewhere in the Midwestern U.S. to the delight of blood-thirsty fans.

Editor’s Note: The Knight’s Lance contributing writer Tom Gaydos is a passionate collector — primarily of Tim Hudson and the Indianapolis Colts — with a strong presence on YouTube. What follows is his insightful take on the pioneering Ring Kings insert from Panini America’s 2008 Americana II set.

Every few Saturday nights I retire to an undisclosed location to watch the fastest-growing sport in the world. And as mixed-martial arts continues its ascent into the mainstream with network TV contracts, advertising deals for some of its biggest stars and steadily increasing press coverage, I hearken back to the days when MMA was nothing more than a hodgepodge of Neanderthals loaded in a cage somewhere in the Midwestern U.S. to the delight of blood-thirsty fans.

But in light of this weekend’s pivotal and highly anticipated UFC 148 PPV headlined by middleweight champion Anderson Silva and fight-promoting prodigy Chael Sonnen, I was inspired to pen this piece on Panini America’s landmark foray into the Octagon almost five years ago.

The logical conclusion as a sport receives more attention and fandom is that the associated collectibles market surrounding it grows. And to produce the first trading card insert set of anything is something special. Panini America has turned the trick in recent years with the first Justin Bieber set and the first Michael Jackson memorabilia cards. But go back even farther and you’ll discover that Panini America also created the first standalone insert set devoted completely to the stars and personalities of MMA. It was a noteworthy first punch to say the least.

In a true pioneering move, Panini America included a 30-card Ring Kings subset in its 2008 Americana II release with sticker autographs, cut autographs and memorabilia cards from some of the most relevant fighters of the day. It was the first set devoted to the sport and I’d like to take you back to that set and highlight just how innovative it was.

To this day, Ring Kings cards certainly stand out against the competition. The front features a busy design to greet the collector: Silver foil board adorned with a splash of paint-like graphics reading “Ring Kings,” the Americana set logo at the bottom left corner, a picture of the fighter prominently toward the right and their name on the top left corner stamped in a slightly contrasting foil. Some collectors may even overlook the subtly woven picture of the athlete in action in the background.

The back of the card is far simpler and includes a bold serial number for each insert and parallel, the name in fancy script, personal stats and a certificate of authenticity for memorabilia and autograph versions. In total, Ring Kings delivered a phenomenal design that captures the elements of the sport with just-right touches of flair and excitement. I’ve yet to see a set since as well put together from all elements, including the checklist.

The checklist features some true greats of the sport: Hall of Famers, legends, multi-weight class champions, movie stars, TV show hosts and perhaps the best pound-for-pound fighter on the planet (Georges St-Pierre). Even a modern day Gladiator herself, the lovely Gina Carano, graces the effort. What more could you want from the debut edition of a sport like this?

Not only are these the first cards of most of these athletes, but also the first memorabilia pieces, prime materials, autographs and cut autographs of many of those included. In some cases, these remain the only cards to date of these stars of yesterday and today (Cung Le for example).

The cut autographs offer the largest surface area to date for inscriptions and many of the signers took advantage of this opportunity by adding unique twists to their typical signatures. Please see the attached gallery below for some of the best examples. Short of a full-sized flat photo, you likely won’t find larger, more-detailed signatures of any MMA fighter.

Typically, when first cards of any athlete surface on the market, the resulting secondary-market sales reflect that with noticeable premiums. Surprisingly, this is not always the case for Ring Kings. In many cases these cards can be acquired for almost the same as, if not for less than, their later-arriving counterparts. I have no idea why; it defies all traditional logic in this hobby. So if you find one of these at a deal, consider yourself lucky — eventually the market will catch up and acknowledge the proper place in this sport’s young collectibles history that this set deserves.

If you have one to sell, make sure you receive the premium any first edition and/or Rookie Card normally warrants. Like a seller whose Jeremy Lin card sold prior to Feb. 4, 2012, you don’t want to switch kick yourself for losing the opportunity.

As I gaze upon the “Big” John McCarthy Ring Kings autograph numbered to 390 I selected as inspiration for this piece, I’m guided by his unfettered judgment and stoic gaze on every keystroke. His stern, disapproving glance for nonsense in his ring captured picturesquely on both sides of the card reminds me to take no nonsense in my MMA collection as well. Go for the original, the true first cards of this rapidly ascending sport to complete your efforts.

Protect them as well as McCarthy would protect a fighter in trouble, as they will be regarded as collecting royalty like the set name prophetically suggests. Cherish every MMAilday (credit to my buddy Adam for that cringe-inducing pun) you’re fortunate enough to receive that includes one of these beauties; each one may be your last as they slowly dissipate from the market.

As the great referee likes to say: Let’s get it on!

First-Round Knockouts
Before you peruse the must-see gallery of combat-sport supremacy, take a look at the lengthy list of MMA superstars whose historic first trading cards were included in the Ring Kings insert: