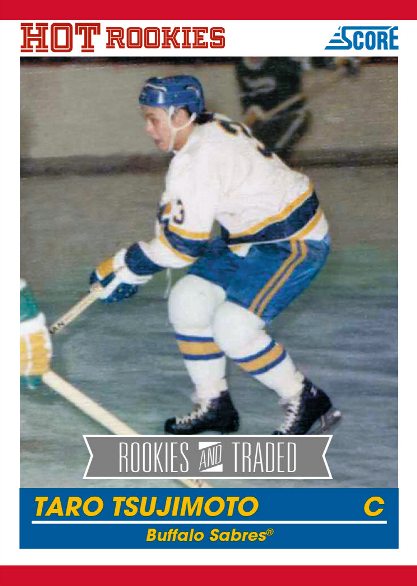 The last paniniamerica Box War of the day and anti

LIVE from #NSCC21, @PaniniAmerica Marketing Director @TracyHackler joins Doug & #49ers legend @jstaley74 to talk about what Panini has in store for the rest of the show & much more! Oh and Joe does some karaoke, of course.

Eleven years before baseball had fictitious fireballer Sidd Finch, hockey gave birth to the legend of Taro Tsujimoto. What hockey has never had until now – 36 years after the mysterious prospect was curiously drafted by the Buffalo Sabres – is a Tsujimoto trading card.

Eleven years before baseball had fictitious fireballer Sidd Finch, hockey gave birth to the legend of Taro Tsujimoto. What hockey has never had until now – 36 years after the mysterious prospect was curiously drafted by the Buffalo Sabres – is a Tsujimoto trading card.

That changed in a big, collectible way this week when Panini America released its 2010-11 Score Rookies & Traded box set. Though each box contains 99 cards, one in every 20 boxes includes a clandestine Tsujimoto Rookie Card. The short-printed nature of the card – there also are 25 copies of a Gold parallel version randomly inserted across the production run – promises to create a buzz not just in Buffalo, where they still chant his name, but across the league.

Tsujimoto, or at least his legend, was born during the 1974 NHL Draft when the Sabres then-GM Punch Imlach’s called out his name during the 11th round. As the story goes, Imlach had grown so frustrated with the methodical pace of the draft’s secretive phone-call format that he dreamed up Tsujimoto as a way to poke fun at the proceedings.

The name was fake. The position (center) was fake. Tsujimoto’s Japanese Hockey League team – the Tokyo Katanas – was fake. The history-making Score Rookie Card, however, is absolutely real.

“The creative team was looking to come up with something special, something really unique, for this program,” said Al Muir, Panini’s Hockey Brand Manager. “The legend of Tsujimoto is one of those great hockey stories that has been perpetuated not just in Buffalo, but around the game. It’s one that gets told to this day in dressing rooms and on bar stools, and that’s what made him a natural for this project.”

The NHL and NHL Players’ Association agreed. Although both organizations employ strict rules when it comes to who is allowed to appear on a licensed trading card, they each were quick to jump on board with this idea.

“We got approval from the league in less than 10 minutes,” Muir said. “They loved it immediately. The PA took a little longer, but then they got behind it in a big way. It was actually a PA staffer who helped us acquire the period-appropriate photo used on the card. Without that, we simply couldn’t have executed the concept this well.”

That leaves one question: Since it isn’t actually Tsujimoto pictured on the trading card . . . who is?

“That’s a mystery for another day,” Muir said