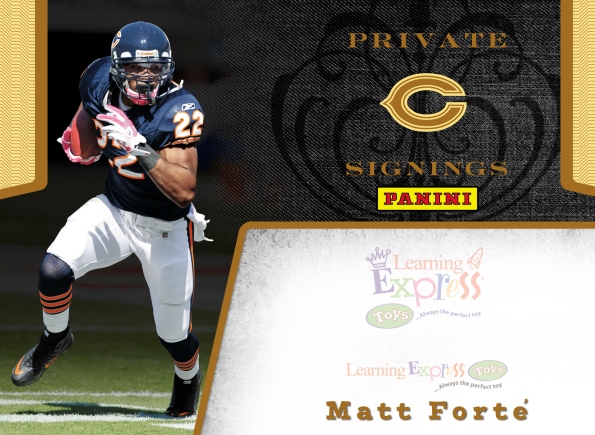 Tickets for the signing are limited to just 300 and are obtainable by purchasing $10 worth of Panini America merchandise from the Glen Ellyn Learning Express location. A portion of the proceeds will be donated to a local charity.

Lucky ticketholders will get to meet Forte and receive an official autographed photo from him.

“The kids really liked to collect the stickers of all their favorite NFL players,” said Randy Horn, owner of the Glen Ellyn Learning Express Toys location. “Due to their low price point, parents frequently used the stickers as rewards for their kids when they met milestones or goals such as doing homework, getting good grades, or doing chores. We plan to recognize the boy who completed the sticker book by giving him the honor of being the first person to meet Mr. Forte.”

Added Jason Howarth, Panini America’s Vice President of Marketing: “Learning Express has been pivotal to the dramatic growth our official Sticker & Album Collections have enjoyed in just two short years in the United States. This special event is a small token of our appreciation for the support Learning Express has provided – and will continue to provide – for a Sticker & Album line that appeals to sports fans of all ages.”

Stay tuned to The Knight’s Lance for complete coverage of next week’s signing.