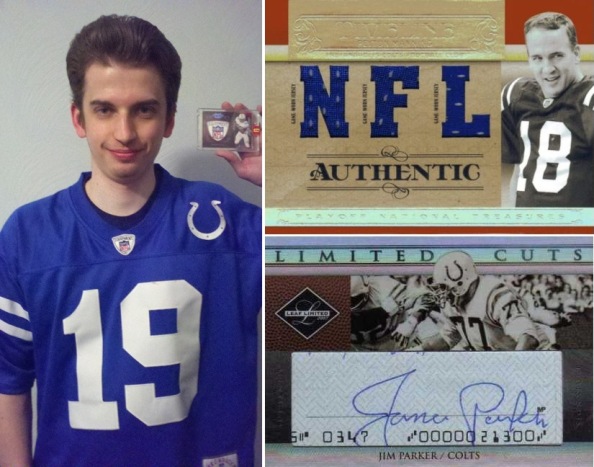 The phone rang in my Connecticut home late on the afternoon of Nov. 24, 1993, as my mother was in the midst of preparing a Thanksgiving feast for eight more people than we could possibly fit at our dinner table. I was charged with answering it and my 10-year-old brain relished the responsibility. My mother was simply expecting my father to be calling before he left work. Instead the voice on the other line was a different family member, my Uncle Ulys.

Editor’s Note: Tom Gaydos is a passionate collector — primarily of Tim Hudson and the Indianapolis Colts — with a strong presence on YouTube. What follows is the entertaining, personal account of just how he came to collect the Colts. Have a similar story you’d like to share with The Knight’s Lance readers? Let us know via the comments section at the end of this post.
By Tom Gaydos
The phone rang in my Connecticut home late on the afternoon of Nov. 24, 1993, as my mother was in the midst of preparing a Thanksgiving feast for eight more people than we could possibly fit at our dinner table. I was charged with answering it and my 10-year-old brain relished the responsibility. My mother was simply expecting my father to be calling before he left work. Instead the voice on the other line was a different family member, my Uncle Ulys.

My mother’s brother had lived in California my entire life and while we hadn’t met in person, we still had a nice relationship over the phone. He knew I was a big sports guy so after the pleasantries he told me a quick yet influential story:
“Tommy, I don’t go to many sporting events. But I had the opportunity to join a friend to watch the San Diego State Aztecs play BYU last Saturday. There’s a running back on the Aztecs that is going to be something special, you should watch where he goes and follow him in the pros.”
Those of you who are big football historians know who I’m talking about already, others may recognize him from an autographed card found in some of Panini’s Black Friday packs this past year.
On April 24, 1994, the Indianapolis Colts used the second overall pick in the NFL Draft to select Marshall Faulk. And on that day, I became a Colts fan. 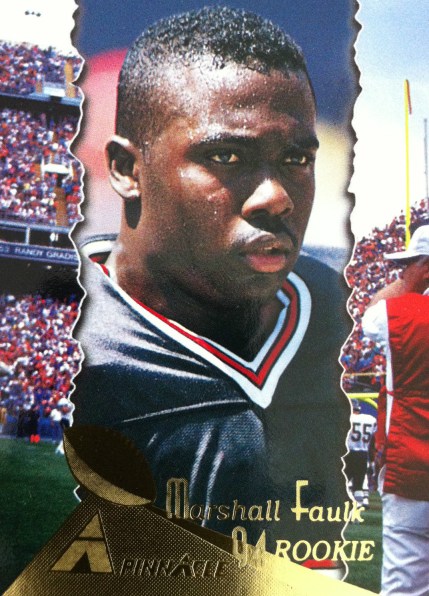 I started scouring my boxes for every Colts card I already owned. And there were quite a few, since very few Colts fans lived in my area. Unfortunately, not many of them were worth much as the team hadn’t been good in quite a long time. As each product was released that year, I tried to pick up a Faulk rookie: One of my favorites was the 1994 Pinnacle #198 with an (albeit sweaty) picture of Faulk still in his SDSU uniform in a tear-like design with eye-catching gold foil at the bottom. It was fun despite the team not doing particularly well; the future Hall of Famer was quickly becoming a force in the league despite the team’s win-loss record.
As the 1997 season rolled around, I began to fear he would be yet another excellent player who would be stuck with a team that would not allow him the opportunity to become great and that my collection would be de-valued as a result. As the season ended, however, my hopes began rising as the team’s record was falling.
A few months before the season ended, I sat at a very nice table in a very expensive restaurant in downtown Boston, a guest of my father’s on a business trip turned brief family vacation where we were meeting two of his bigger clients on what turned out to be a large deal for his company. One of the parties was from Knoxville, Tenn., a fan of and contributor to the University of Tennessee. At that dinner, during a break from the boring “adult talk,” he asked me if I liked football. I said “yes” and he responded that there was a quarterback at his alma mater who was going to make a big splash in the league after he completed his upcoming senior season. I think you can guess who he was referring to and who the Colts chose No. 1 overall in the 1998 NFL Draft.
So now armed with a direct, personal connection to two of the team’s star players, I began avidly collecting the team. But it was a daunting task for a 14-year-old without a paper route. So I modestly assembled what cards of theirs I could, settling for a Peyton Manning Score Rookie at a show while drooling over the Contenders card in the showcase. I picked up a few Marvin Harrison pieces as he was growing to become the team’s main receiving target at a mall show from young male dealers more concerned with the women walking by than the true value of what was in their “miscellaneous” box. The team still wasn’t any good, but I was dedicated.
Despite the team’s history and myriad stars, some of the acquisitions were relatively affordable when purchased at local shows and shops. This was prior to the ascendance of online shopping, so local dealers often discounted out-of-market items substantially as the demand for them was often minimal. I took advantage of that whenever possible; the dime box occasionally uncovered some treasures.
Even with Faulk being traded prior to the 1999 NFL Draft for a pair of picks after a series of “misunderstandings” with Colts owner Bill Polian surrounding his contract, I was still hooked (it pained me to see him become the catalyst for that Rams team, but I was secretly happy he found success somewhere). I became enamored with the history of the team and the legendary names that stopped playing years before I was even born. This was cemented many years later with my reading a book that was unfortunately released posthumously about Colts legend Johnny Unitas that was as much about his upbringing and personal struggles as the formation of professional football as we know it.
I learned that the old man I knew as the Patriots’ coach when I first started collecting, Raymond Berry, was the man who worked with a young Unitas on some of the first route-based passing the NFL would see. The list of their greats was impressive: Jim Parker, Weeb Ewbank (the winning coach of the two best professional football games ever, in my humble opinion), John Mackey, Lenny Moore, Art Donovan, Gino Marchetti, Earl Morrall (the savior of Super Bowl V), Lydell Mitchell, Eric Dickerson and so many more. 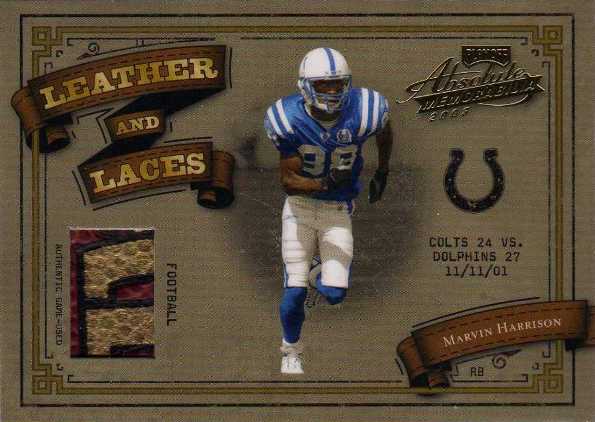 Despite their “hiccups,” like moving from Baltimore to Indianapolis in the middle of the night (I grimace every time I see the brand of eighteen wheel trucks they used) and the John Elway draft fiasco, I felt quite a bit of pride about this organization.  With history like that and a future so bright, I thought “who wouldn’t want to be a Colts fan?”
As the years passed, the team got better and, as a result, the cards became more expensive, too. Any fan of a team with the degree of success they experienced understands my wallet’s pain. It also didn’t help that they seemed to favor offensive skill-position players like Reggie Wayne and Dallas Clark in early draft rounds, but they were the highlights of many Colts victories along the way, including Super Bowl XLI. But I collected what I could, when I could.
To me, that’s what collecting any team or player is really about. It’s easy to get caught up in the rich-kid syndrome: Being jealous of the kid up the block who can drag his parent into the hobby shop and clean off a shelf or buy any card in the showcase he wants. But to me, collecting — in my case, the Colts — isn’t about what someone else has. It’s about what YOU have and appreciating that. Looking through that binder or box and feeling a sense of satisfaction about what you have assembled while filling with hope about what could be added in the future.
Players will come and go, the uniform will go through revisions (Buccaneers fans are likely very happy that the orange pastel “creamsicle” era is over) and the team may even relocate. But if you’re a true collector of a team, you will stick with it.
My story is possibly a bit out of the ordinary; a lot of fans inherit their fandom from their parents or base it on geography. Far more convenient choices I’m sure. I still haven’t made the pilgrimage to Indiana to see a game in the home stadium and future prospects aren’t looking very good on that front, either. But every Sunday I don apparel emblazoned with the blue-and-white horseshoe. I proudly represent the team I love (in retrospect, the blue Mohawk I added to the ensemble in a primarily Jets bar for the 2009 AFC championship game may have been a bit excessive). Many of those same Sundays, I sit watching the game with my collection in front of me; sorting, sleeving, top-loading and otherwise organizing while taking time to appreciate what I have managed to amass.
I didn’t write this to incite a comment debate regarding what team is better to follow. That’s incredibly subjective and almost impossible to decide. I was inspired to write this to explain the path to my own fandom and hopefully to spark some introspection from all of you. Often, we get caught up in the minutia of our team and the sport in general so we lose sight of why we started following our team in the first place. Hopefully in reading this, you will recall that and relay your story as well.
As a new era is about to begin in my team’s history, I approach it with the same guarded optimism I did after receiving that serendipitous phone call from my now-late Uncle Ulys and sitting at the table with my father’s now-late business partner. I collect for them too, since this hobby is as much about the people as the cards themselves.
I remember why I began collecting in the first place and how it has afforded me a phenomenal opportunity to network with some of the finest people I have ever known. Even as I put this piece together, my collection was growing: A nice 2011 Panini America Plates & Patches Delone Carter patch autograph will be on the way to my mailbox as soon as I pay the seller. While your path may be different, hopefully you feel the same sense of pride in your team as I do in mine, apply it to collecting them and realize the same satisfaction in the results as I do.
In summary: GO COLTS!

28 Replies to “Panini America Collector Perspective: Why I Collect the Indianapolis Colts (with Gallery)”