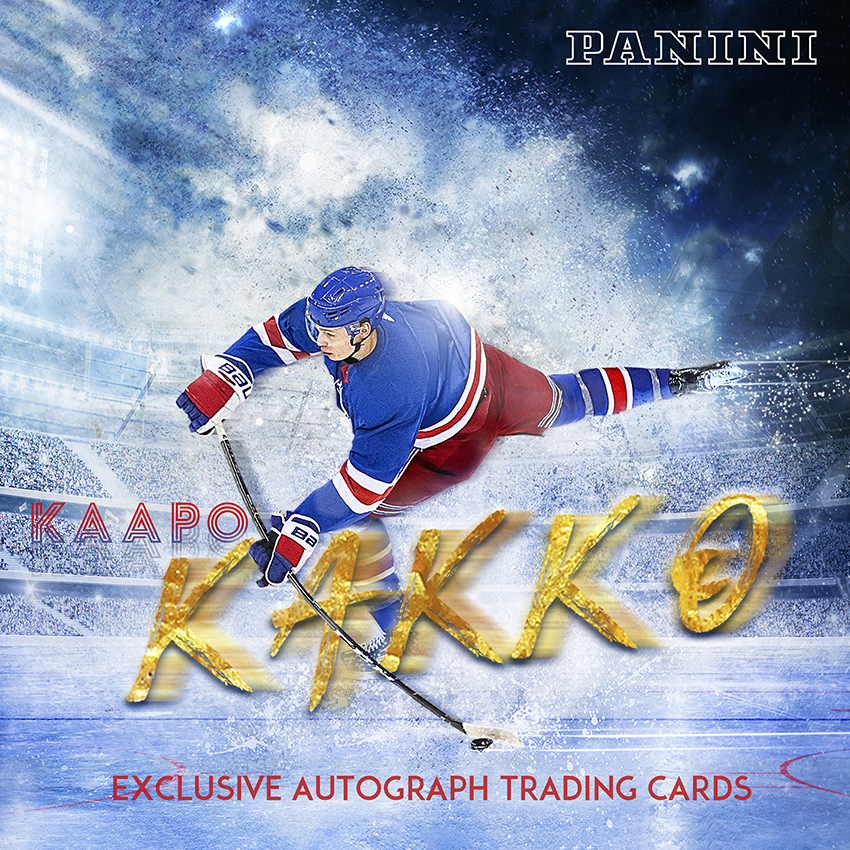 Panini America, the world’s largest licensed sports and entertainment collectibles company and the exclusive trading card manufacturer of the NFL, NFLPA, NBA, NBA Players, College athletics and NASCAR, announced today that it has signed Finnish hockey star Kaapo Kakko to an exclusive autograph trading card agreement. As a result of the unique partnership, Panini America will produce the only autograph Rookie Cards of Kakko, selected No. 2 overall by the New York Rangers in the 2019 NHL Draft.

Many of those cards will be available to fans and collectors directly through the company’s online store, where Kakko’s cards will be featured in some of Panini’s most compelling brands. In addition, Kakko’s cards will be featured on Panini’s Instant platform (a platform designed to celebrate real-time performances and milestones by making an individual player’s trading card from that moment available in real-time and for 24 hours) or the Panini Direct app and will chronicle Kakko’s entire rookie season.

In addition, Kakko’s cards will be found in the company’s industry-leading promotional products created for Black Friday, Father’s Day, the National Sports Collectors Convention and more. His first trading cards (and Panini America’s first hockey cards since the 2013-14 season) will be released this week as random inserts in the company’s 2019 National Sports Collectors Convention set. Kakko, a superstar in Finland who’s expected to transition nicely to the NHL, also will be featured prominently in Panini America’s marketing initiatives and a number of other key strategic Panini initiatives.

“Kaapo Kakko is nothing less than an international hockey phenomenon and his arrival in the U.S. – and New York, no less — is one of the most exciting developments the sport has seen in years,” said Panini America CEO Mark Warsop. “He’s expected by many to drive the hockey trading card market this season and is poised to become the next great athlete in the sport of hockey, and we’re thrilled to have him as an exclusive member of the Panini America team. We’re looking forward to working closely with him to create exciting and creative trading cards for fans and collectors and having him be a part of a number of new initiatives in the trading card category.”

“It’s an honor for me to join Team Panini, a group that has a proud history internationally and is the global leader in the trading card market,” Kakko said. “I’m impressed by their creativity and their desire to push the envelope to continue raising the bar. This is going to be an awesome partnership.”

Kakko is the youngest player ever to win gold in all three International Ice Hockey Federation tournaments (World Championships, World Junior Championships and World U18 Championships).