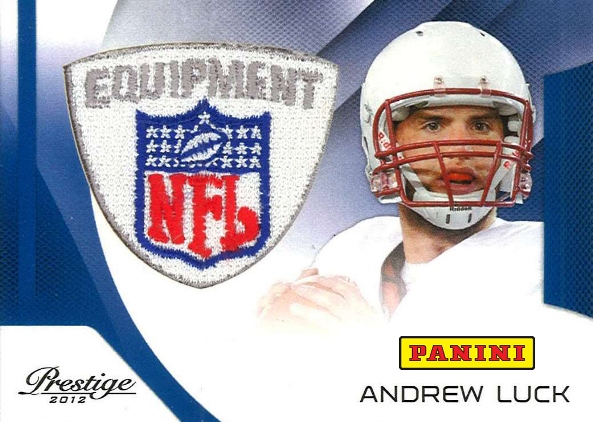 “Andrew Luck is poised to become one of the next great NFL quarterbacks, and football fans and collectors are eagerly anticipating his first NFL and NFL PLAYERS licensed trading cards,” said Panini America CEO Mark Warsop. “This partnership will help us deliver what absolutely will be the most coveted collectibles of the 2012 NFL season. We’re happy to welcome Andrew to the Panini America family.”
Luck was awarded the Walter Camp Award as National Player of the Year, Maxwell Award and First Team All-American honors last season on the strength of 3,517 passing yards and 39 total touchdowns. Luck also holds Pac-12/Pac-10 records for highest completion percentage in both a sing season (2011) and career, as well as the record for passer efficiency rating in a career.
Luck’s first officially licensed trading cards will appear in Panini America’s 2012 Prestige Football product that is slated to release in early June. In addition to traditional trading cards, Luck also will be featured exclusively on the company’s pioneering HRX Video Trading Card technology, product packaging and in social media initiatives throughout the length of the agreement.
“I’m truly impressed with the creativity and innovation that Panini America delivers to the sports collectibles industry,” said Andrew Luck. “To be part of such an exciting rookie class that will be featured in Panini trading card products in 2012 is something I’m looking forward to.”
Panini America is the only company in the world that manufactures licensed trading cards and stickers for the NBA, NFL, NFL PLAYERS, NHL, NHLPA, MLBPA and FIFA World Cup. The company also has exclusive relationships with USA Baseball, USA Basketball and the U.S. Soccer Women’s National Team.  In addition Panini also has relationships with the Naismith Memorial Basketball Hall of Fame, The Pro Football Hall of Fame and the National Baseball Hall of Fame and owns exclusive entertainment licenses with Disney, Justin Bieber and Michael Jackson, and more than 600 global licenses with other sports and entertainment properties.