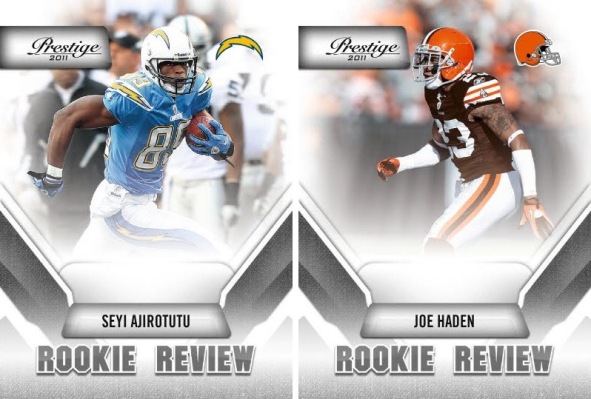 The 2011 NFL Draft kicks off April 28, which means we're now less than two weeks from welcoming a new rookie class -- and unlimited potential -- to the wonderful world of football cards.

The 2011 NFL Draft kicks off April 28, which means we’re now less than two weeks from welcoming a new rookie class — and unlimited potential — to the wonderful world of football cards.

Of course, the impending player-selection process also triggers the official countdown to the release of the first fully licensed 2011 NFL trading card set: 2011 Prestige Football, which hits streets May 18 updated with complete draft information on every Rookie Card.

But before that, we thought we’d take this opportunity to look back at some of the top rookie performers from the 2010 NFL Draft — you know, the class headlined by the likes of Sam Bradford, Ndamukong Suh, Tim Tebow and Ryan Mathews — by looking ahead at the 40-card Rookie Review insert slated for the upcoming Prestige release.

The sizable set is largely responsible for helping 2011 Prestige Football deliver a much-needed reminder of last season’s top first-year performers while not detracting from the product’s distinct new-rookie-class feel. Rookie Review provides both crisp game-action photography and a who’s who recap of last season’s most fantastic freshmen, including all the big names you’d expect and a few surprises (Seyi Ajirotutu, anyone?).

The base Rookie Review cards will fall one per hobby box, on average, and will be paralleled by Signature, Material and Prime Material versions.

So until you can begin collecting the set in its entirety beginning May 18, here’s an extensive gallery to whet your appetite.