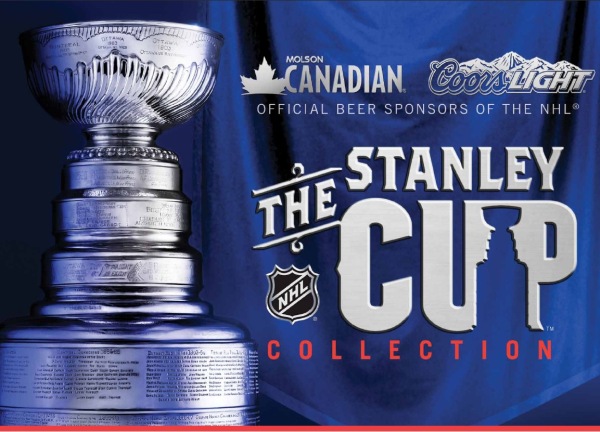 Hockey cards, the Stanley Cup Playoffs and Canada's favorite beer. While that dreamy combination may seem simply too good to be true, it's the very essence of a massive, multi-platform promotion from Molson Canadian being enjoyed right now by millions of hockey fans north of the border.

Hockey cards, the Stanley Cup Playoffs and Canada’s favorite beer. While that dreamy combination may seem simply too good to be true, it’s the very essence of a massive, multi-platform promotion from Molson Canadian being enjoyed right now by millions of hockey fans north of the border.
And thanks to a unique partnership between two industry heavyweights, four-card packs of special trading cards produced by Panini America represent focal points of specially marked cases of Molson Canadian, Coors Light and Molson Export beer to coincide with the start of the Stanley Cup Playoffs. The cards also are available on-location inside key hockey-watching Molson Canadian accounts across Canada, including every Boston Pizza restaurant in the country.

“It’s enormous for us,” says Molson Canadian Brand Assistant Cam MacNeil. “It’s the first program that we’ve run across many different brands, and we’re running this across our three biggest brands. We’re activiating with very large-scale brands with one platform of the NHL. It’s not one brand trying to own all of the hockey content, it’s three brands all coming together under one program, the Stanley Cup Collection.”
Said Jason Howarth, Panini America Vice President of Marketing: “The Molson Stanley Cup Collection is a truly engaging way to capitalize on the passion and excitement of the NHL Stanley Cup Playoffs. Molson’s integrated, multi-platform campaign will resonate with NHL fans during one of the most exciting times in the sporting year. The Molson Stanley Cup program delivers a unique collectible experience and Panini America is proud to be a part of what will be one of the best NHL sponsor activations.”
The Stanley Cup Collection, a 92-card set produced by Panini America, includes one card honoring each Stanley Cup champion in history. In addition to the physical cards inserted into specially marked cases of Molson Canadian, Coors Light and Molson Export, Molson officials enhanced the 92-card set by incorporating a virtual component available exclusively through a vibrant Facebook application that serves as the centerpiece of the entire Canada-only promotion.
Every physical card produced for the program has a special PIN number printed on the back. Entering that number into the Molson Facebook app unlocks that card virtually. In addition, every code entered also qualifies  users to win a trip to the 2012 NHL Stanley Cup Finals.
Once those virtual cards are in your collection, you’re free to trade with other users via a unique virtual trade floor, collect by team or collect the complete set all in an effort to win other Molson Canadian NHL prizes.
“The Facebook app went live on March 15 and in less than three weeks there have been 132,000 PINs redeemed, 2,500 trades complete and almost 5,000 sets completed,” MacNeil says. “The activity speaks for itself. People are collecting the sets. People think it’s a cool program.  And hockey content from the NHL Playoffs will really amplify that.”
But even now, with the NHL Playoffs just underway, the secondary market activity surrounding the in-case cards suggests frenzied interest already. A complete 92-card set recently sold on eBay for $240, an instant-win card from the set sold for more than $132 and sealed four-card packs have sold for more than $40 apiece.
As of Thursday morning, there were almost 800 current and completed eBay listings for the search term “Molson Stanley Cup.”
That kind of fervent activity — both online and in-pack — speaks to the unrivaled passion created by the unparalleled combination of the Stanley Cup Playoffs, hockey cards and Canada’s favorite beer.
“Something we’ve always known is that hockey — especially when there’s a lot of emotion involved in the playoffs — is an amazing beer occasion,” MacNeil says. “Whether people are getting together with their friends at home or in bars, it’s a great time to not only talk about hockey but to enjoy beer as well.
“It’s the emotion that really helps drive the fans’ passion during the playoffs, and that’s something that we’ve tried to connect to consumers with, whether it be showing the Stanley Cup on primary packaging or having a commemorative card program that talks about the history of the Stanley Cup.
“We’re not even three weeks into the program and people are already starting to make bids on eBay. That’s something we joked about in the beginning but it’s great to see because it shows that people are really valuing these in-case items as something special.”
Added Panini America’s Howarth: “It’s safe to say that while the Molson Stanley Cup Collection program is only live in Canada, NHL fans in the U.S. won’t be sitting on the bench and will be looking for ways to acquire the cards celebrating their favorite teams’ Stanley Cup Championships. There is no doubt that will be a significant driver for the Stanley Cup Collection cards on the secondary market and eBay activity for set collectors.”
The gallery below details just some of the excitement being generated by the program so far throughout Canada. Be sure to visit The Knight’s Lance tomorrow when we’ll deliver a complete 92-card gallery showcasing every card Panini America produced for the promotion.