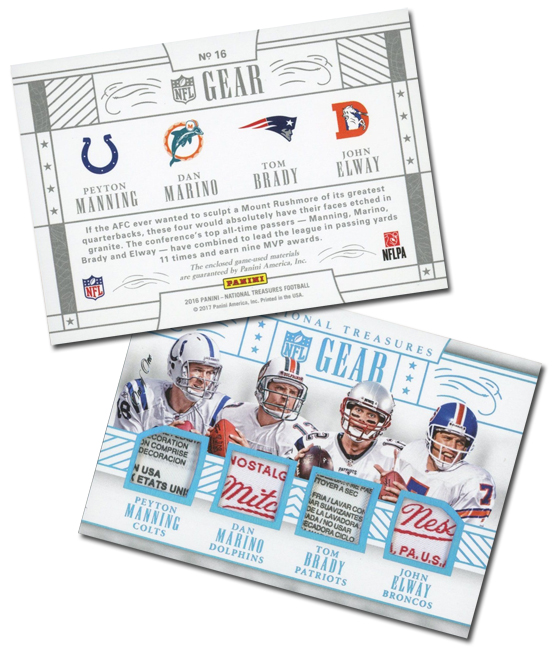 Panini America's Nick Matijevich, the company's Product Development Director for Football, issued the following statement on Tuesday regarding an inadvertent error that occurred in the recent release of 2016 National Treasures Football:

Panini America’s Nick Matijevich, the company’s Product Development Director for Football, issued the following statement on Tuesday regarding an inadvertent error that occurred in the recent release of 2016 National Treasures Football:

It has come to our attention that an inadvertent error was made in the authentication copy on three cards that appeared in the NFL Gear Quads Laundry Tag set from 2016 National Treasures Football. Only one of the three cards has made it to the secondary market at this time, but in doing our due diligence to determine how the error occurred, we discovered that two other cards in this parallel have the same uncorrected error in the authentication copy.

We are disappointed the error occurred, but it was truly an honest mistake with no intention of trying to mislead our customers. All other parallel levels of these cards do contain game-worn material, and this mistake occurred because the Laundry Tag reservations from the player-worn jerseys were missed when routing the cards for approval. Obviously, this is something that we will be more diligent about in the future.

Although there are other retired player-worn materials in the program, we believe that they are all properly identified in their authentication copy. However, the majority of the retired swatches in this program are from game-worn items.

If you have one of the three cards listed below in your possession, you can send it to Panini America at the address provided and we will rebuild your card with the proper authentication copy:

Once again, we apologize for the error and the confusion it has caused.