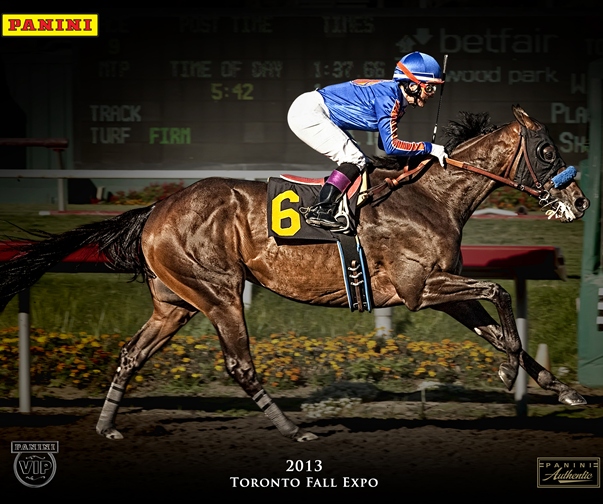 No Ronaldo, no problem. 🇵🇹

Capture tons of exciting moments from the 2022 FIFA #WorldCup by way of Panini Instant trading cards! New cards go live every day (Mon-Fri) at 11am (CST)! Each card has a base version and /5 and 1/1 parallels!SHOP: qr.paniniamerica.net/29h7g#whodoyoucollect #FIFAWorldCupQatar2022 #Qatar2022 #thehobby #PaniniInstant #worldcup2022 ... See MoreSee Less

The Round of 16 ends today, but the World Cup action is just heating up! Pick up your album today! qr.paniniamerica.net/2hzmq#whodoyoucollect Fernando Fiore #Qatar2022 #FIFAWorldCup #worldcup2022 #worldcup #FIFAWorldCup2022 ... See MoreSee Less

Panini America, the world’s largest sports and entertainment collectibles company, will be right by Chantal Sutherland’s side – literally – when the decorated female jockey races this weekend during the 2013 Breeders’ Cup World Championships at Santa Anita Park in Arcadia, Calif.

Panini America, the world’s largest sports and entertainment collectibles company, will be right by Chantal Sutherland’s side – literally – when the decorated female jockey races this weekend during the 2013 Breeders’ Cup World Championships at Santa Anita Park in Arcadia, Calif.

The Canadian jockey with more than 930 career victories will sport the Panini logo on her riding shirt and pants for four races, including in the Breeders’ Cup World Championships $1,000,000 Filly & Mare Sprint on Saturday on board Brazilian-bred Great Hot at 4:21 PM (EDT) on NBC Sports Network.

Panini America also announced today as part of an expanded relationship that Sutherland will appear in two upcoming trading card releases. She’ll debut in 2013-14 Crown Royale Hockey’s Fans of the Game insert in support of her beloved Toronto Maple Leafs. She’ll also be included in the April 2014 release of the company’s popular Americana brand.

“Chantal’s impeccable track record as a bona fide winner and her ability to transcend the sport are key components to this partnership,” said Jason Howarth, Panini America Vice President of Marketing. “We’ve just given sports trading card fans a rooting interest in this year’s Breeders’ Cup World Championships on Saturday.”

In June of 2012, while riding Game On Dude, Sutherland became the first female jockey to win the Hollywood Gold Cup at Hollywood Park Racetrack in California. But Sutherland is about more than stirring performances on the track. The Manitoba-born Sutherland is also a model and television personality, and one of the most recognizable athletes in all of horseracing. She has graced the pages of Sports Illustrated and Vogue, and was named one of People Magazine’s “100 Most Beautiful People” in 2006. She also has appeared on the Animal Planet reality TV show “Jockeys” and the HBO series “Luck.”

“Panini has a rich history of including some of the most collectible horseracing trading cards of all time featuring horses and jockeys in our Golden Age and Americana products, and we’re excited to be able to introduce Chantal into that mix very soon,” Howarth said.

Next week, in conjunction with the 2013 Toronto Fall Expo, Panini America will host its third invitation-only Panini VIP Party. Sutherland will join other athletes including NHL legend Eric Lindros and Canadian Football League superstars Chad Owens and Henry Burris as special guests of Panini to engage and interact with party-goers; Panini America will announce additional athlete attendees next week.

Stay tuned to the Panini America Twitter account leading up to and during Sutherland’s race on Saturday to see how you can win boxes of 2013 Golden Age Baseball in a special contest.