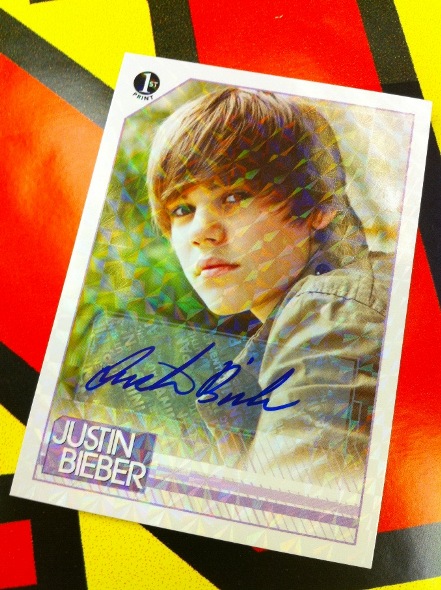 Equipped with enough time and perhaps a supercomputer, it’s possible to count the ways that Canadian-born singing sensation Justin Bieber has exploded into a global phenomenon.

Equipped with enough time and perhaps a supercomputer, it’s possible to count the ways that Canadian-born singing sensation Justin Bieber has exploded into a global phenomenon.

But Bieber has only one officially-licensed trading card set.

“It’s awesome; it makes me feel great,” Bieber said about appearing in his own trading card set. “I always dreamed of being a hockey player and having my own trading card. I remember always collecting hockey cards, so the idea that kids are going to enjoy my cards like I enjoyed my hockey cards is amazing. It’s going to be sick!”

“We are thrilled to add Justin Bieber to our stable of entertainment collectibles,” said Panini America CEO Mark Warsop. “At such a young age, he has become an international superstar, and there’s no doubt that there are millions of fans across the world eager to begin collecting his trading card and sticker set.”

The perfect stocking stuffer, Panini’s official Justin Bieber collection is available at Bed Bath & Beyond, f.y.e., Target, Toys“R”Us and Walmart stores nationwide, as well as in Justin Bieber’s online store. The Justin Bieber trading card packs retail for $1.99 and include five cards and one sticker.