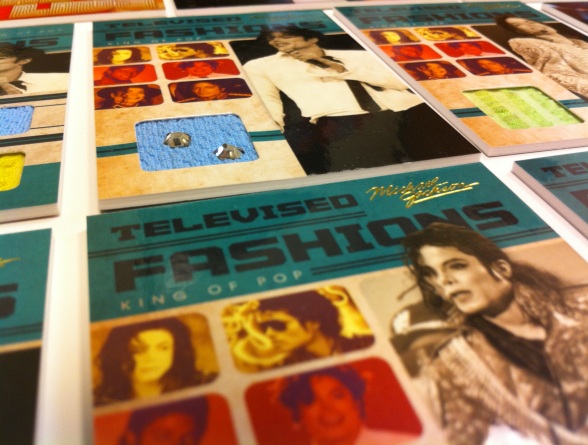 Sometimes, under extraordinary circumstances, clothes do make the man. They make him more collectible, more memorable, and perhaps even more touchable than he’s ever been.

The man in this case is, well, “The Man” — Michael Jackson. As for the history-making clothes, they were worn by the King of Pop himself from 1971 through 1974 during many memorable performances, including “The Flip Wilson Show,” “American Bandstand,” “Soul Train,” and televised specials anchored by such luminaries as Bob Hope and Diana Ross.

Leading trading card manufacturer Panini America purchased the history-soaked pieces of sartorial splendor at auction two years ago — and cut them up.

As a result, Jackson fans and collectors everywhere will have the unique opportunity to own pieces of Jackson when the company’s Official Michael Jackson Trading Card Set hits stores next week.

“We’re thrilled to be able to partner with the Jackson estate in an official capacity to honor Michael’s memory and his legendary career with this truly unique trading card set,” said Panini America CEO Mark Warsop. “We’ve been working diligently for more than two years to bring this set to market, and we’re confident that the inclusion of Jackson-worn memorabilia will make this a product unlike any other we’ve ever produced.”

Below you’ll find a stunning gallery of the Jackson memorabilia cards randomly inserted into the set, along with the corresponding auction description of the respective piece of clothing used.

The Official Michael Jackson Trading Card Set will be available starting next week at Target stores nationwide and at the Panini America Online Store.

See the links after the gallery for additional coverage of this groundbreaking set.