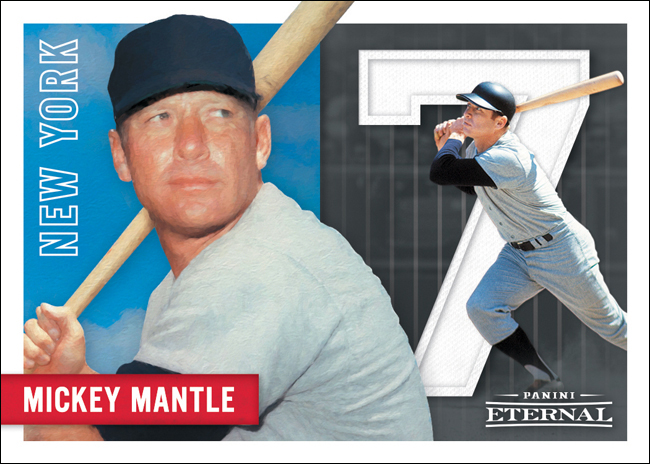 One of the greatest baseball players of all time, the legendary Mickey Mantle, is making a triumphant return to the baseball trading card hobby for the first time since 2012 thanks to a new trading card and memorabilia partnership announced today between Panini America, the world’s largest licensed sports and entertainment collectibles company, and the Mickey Mantle Estate.

One of the greatest baseball players of all time, the legendary Mickey Mantle, is making a triumphant return to the baseball trading card hobby for the first time since 2012 thanks to a new trading card and memorabilia partnership announced today between Panini America, the world’s largest licensed sports and entertainment collectibles company, and the Mickey Mantle Estate.

The multiyear agreement grants Panini America, a licensee of Major League Baseball Players Association (MLBPA), the Baseball Hall of Fame and the exclusive partner of USA Baseball, the rights to incorporate Mantle’s likeness, cut autographs and memorabilia in up to six Panini trading card products a year. In addition, Mantle will be featured on Panini packaging on two trading card releases per season.

To coincide with the announcement and for a limited time, Panini is releasing through its Panini Eternal platform the first card in Panini Instant’s “Mickey Mantle Collection,” which will feature trading cards that will be released throughout the season and coincide with specific days tied to key Mantle moments and milestones.  The first card in the Collection will release today at 2PM (CT).

“We are honored that the Mantle family has chosen Panini America to represent Mantle’s legacy on trading cards for now and the future,” said Jim Stefano, Panini America Senior Director of Product Development. “This is a historic day for Panini MLBPA-licensed baseball trading card products. We believe trading card collectors will be excited about what we will be creating in terms of product content and promotions by utilizing arguably the most collectible player in baseball history. We plan to work closely with the Mantle family on The Mick’s triumphant and long-overdue return to the trading card marketplace.”

Mantle’s first Panini America trading cards in MLBPA-licensed product will arrive in the company’s 2017 Immaculate Baseball release slated to release in August. Even now, almost 50 years after his retirement and more than 20 years after his passing, Mantle remains an icon in both sports and sports trading cards. Through the partnership with the Mantle Estate, Panini America will procure cut autographs and memorabilia directly from the Mantle family.

“Panini America is the recognized leader in the trading card category and a world class organization. We’re excited to see how respectfully and innovatively they honor our father and get his trading cards into the hands of baseball trading card collectors and introduce him to a new generation of collectors,” said David Mantle, Mickey’s son.

“Panini America has treated us like family from the beginning and blew us away with the amount of passion and respect their people have for our father and his legacy. At the end of the day, it was an easy decision to partner with them as the only trading card company that will be able to include Mickey Mantle,” added Mickey’s son Danny Mantle.