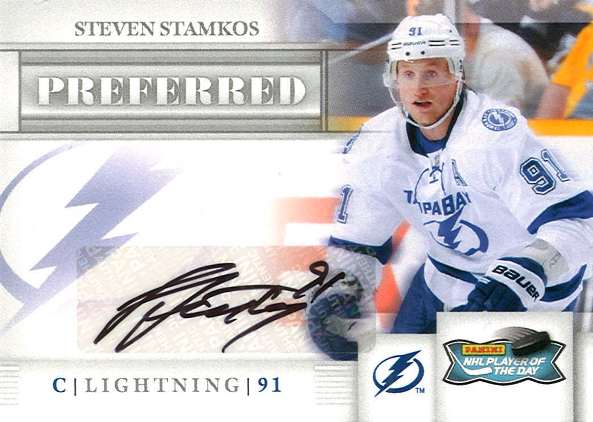 As thousands of Panini America NHL card collectors visit their local hobby shops beginning this month in search of their favorite NHL players, one lucky collector will turn that pack into the opportunity to spend a day with an NHL player.

As thousands of Panini America NHL card collectors visit their local hobby shops beginning this month in search of their favorite NHL players, one lucky collector will turn that pack into the opportunity to spend a day with an NHL player.

Panini America, in conjunction with the National Hockey League Players Association, is bringing back the popular Panini NHL Player of the Day program to nearly 300 hobby shops across the U.S. and Canada from now until March. You can find a list of participating hobby shops www.PaniniPod.com.

In recent days, participating hobby shops received a poster featuring 30 top NHL players (one per team). Each day during the promotion, one of the featured players along with “wild cards” Alex Ovechkin and Tim Thomas will be designated as players of the day. Collectors who uncover cards of the Panini NHLPOD or wild cards in a pack of cards will win a prize. At the end of each week a larger weekly prize will be awarded to all of the previous daily winners.

At the end of the month, a grand prize of a special Panini America NHLPOD autograph card will be awarded to one of the weekly winners. Each store winner will then be entered into a national sweepstakes contest for the chance to spend a day with an NHL player.

“The Panini NHL Player of the Day promotion is a great way for hobby shops to engage existing and attract new hockey collectors to their stores,” said Jason Howarth, VP of Marketing for Panini America. “At the same time, it also rewards NHL card collectors with valuable prizes and gets one lucky collector up close and personal with their favorite player, creating unforgettable memories when they buy Panini NHL trading cards.”

“The NHLPA is pleased once again to work in partnership with Panini America and our other licensees to support the hundreds of neighborhood sports collectible shops throughout the U.S. and Canada for the Panini NHL Player of the Day promotion,” said Adam Larry, Director of Licensing and Associate Counsel for the NHLPA. “The program was a great success last year and we expect it to be even better received this year by collectors of NHL player trading cards across North America.”

In addition to awarding shops with more than 15,000 prizes, shops are also invited to enter their winner into the national sweepstakes for additional prizes, including autographed cards and the chance to reward one lucky collector with a $250 shopping spree and the opportunity to spend a day with an NHL player, which can include a private party in their home for friends and family and a free autograph session for the community at the local hobby shop.

For a sneak peek at the complete 2012 Panini America NHL Player of the Day set, including autographs, check out the gallery below.